In his classic book Teaching to Change Lives, Howard Hendricks made the case that effective communication leads learners to understand truth and “feel deeply about it” (83). Understanding comes when truth “affect[s] their actions in a significant way.” This action-shifting understanding is exactly what school leaders yearn to catalyze through professional development activities.

During his earthly ministry, Jesus led and communicated in such a way that brought about growth in his disciples. Today’s Christian school leaders can learn from the ancient, ultimate leader. Though Christ is much more than a paragon of leadership, he is not less than that. The content of Christianity is largely, and rightly, focused on what Jesus accomplished, but my aim here is to highlight one imitable instance of how he did his work. Specifically, it is my desire that institutions committed to discipleship, particularly in an academic setting, consider the leadership culture that Jesus modeled in the prototypical discipleship setting. As we teach his message, we can also learn his leadership methods.

Jesus’s teachings stirred up strong responses. In John 10, people picked up stones to execute him. Later, in the same chapter, the people tried to seize him, “but he escaped their grasp” (John 10:39). Consider what the disciples may have been feeling at this time. They had hitched their lives to the teacher, but now that teacher was a wanted man. Imagine the wave of relief that must have washed over them when they escaped. Then, in the very next chapter, Jesus proposes that they return to the scene of their near demise. The disciples reply in a predictable, relatable manner: “A short while ago the Jews there tried to stone you, and yet you are going back?” (John 11:8). They seem incredulous. Yet, they went.

Following Christ as one of his hand-selected representatives was challenging and costly in the disciples’ day. Likewise, representing Christ as academic disciple-makers can be bruising in other ways today. A Christian school teacher in Ontario or Arizona may not be likely to be struck with stones, but the God we follow is as controversial in the secular, postmodern West as he was in the religious, ancient Near East. The Lord told his disciples, “Whoever wants to be my disciple must deny themselves and take up their cross and follow me. For whoever wants to save their life will lose it, but whoever loses their life for me will find it” (Matt. 16:24–25). His words were true then and they are true now. Why did the disciples sign up for this life of death and loss? Why did they walk with Christ even to the place of potential stoning?

The way that Jesus led his team to, and through, difficulty in the first century has much to teach us about leading in the twenty-first. In walking with the Lord into danger, his disciples were experiencing a hands-on learning experience that was an essential part of the “professional development” that Jesus had planned for them. While the andragogy of Christ is a goldmine, I intend to excavate a single deposit here. In the face of obstacles, Jesus invited the disciples to journey with him. While the Bible contains important instances of Jesus sending his followers out, in this case, he did something different. He included the disciples in his own journey. Note his words in John 11:7: “Let us go back to Judea.” Jesus’s plan was that they would go together.

The power of Jesus’s approach can be understood clearly by taking a close look at a particular word he used. The phrase “let us go” comes from the Greek word ἄγωμεν. This is a first-person, plural subjunctive verb. The first-person, plural nature of this verb makes it inclusive: let us go. Jesus actively associated his disciples with himself. They were a unit—a team. The subjunctive mood of the verb conveys possibility: let us go. Jesus used this verb as a compelling invitation. He said, “Let us go” rather than “You must go” or “I will go.” He wanted his team to share his journey and his experience. He wanted them to go together. He was asking them to join him.

How did the disciples respond? Thomas reflected Christ’s own words as he addressed the other disciples, saying, “Let us also go, that we may die with him” (John 11:16). Like Jesus, Thomas employed the first-person, plural subjunctive ἄγωμεν. Before even taking a single step on the journey, Jesus’s plan was already succeeding. Thomas was acting as a leader among followers. He was encouraging and inviting his peers to join him in joining Jesus. The student was becoming like the teacher.

While the relationship between Jesus and his disciples is not equivalent to that of a school leader and staff, the principle here can translate to today’s Christian schools. The experience is different, but Jesus’s disciples were Christian teachers. Like the disciples, modern teachers face challenges, limitations, and questions. The disciples needed help, and so do we. They needed development just like we do. So how do Christian schools develop cultures of learning and growth? What types of leadership best help teachers succeed? How can we help teachers keep going when the job is tough?

Dr. Kelly Hayes teaches classes in Bible, worldview, and worship at The King’s Academy in Florence, SC. He also serves as biblical integration team leader and chapel coordinator. Kelly has served as pastor and teacher in environments and groups that have spanned age, size, and region. He is married to Jessica. They are parents of toddler-age triplets. You can read more of his writing at LeadLikeThis.com. 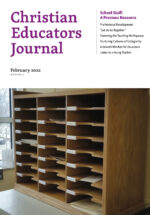