Northumberland Christian School (NCS) in Cobourg, Ontario, is uniquely positioned in proximity to the community of Alderville First Nation. For over twenty years, NCS has enjoyed a partnership with Indigenous families who choose to send their children to Christian school rather than local public or separate schools. Over the last decade, Alderville students have accounted for up to 20–25 percent of the student population at NCS. With such a high percentage of students coming from Alderville, it became apparent that much could be done to support, encourage, and honor the history and traditions of our local First Nations community. This has been our journey.

I am a white, middle-aged teaching principal of British descent. I live on land adjacent to Alderville First Nation, land that has been carefully stewarded by the Anishinaabe people and many other First Nations from time immemorial. I believe God has invited our school community into his incredible work. By choosing to accept his call to wave a banner of love and support, of truth and reconciliation, we may help a new generation of First Nation children say that through their education, they were encouraged, included, and valued. I feel equally responsible to ensure that non-Indigenous students, my own included, grow up in relationship with, and as advocates for, Indigenous communities. We are all treaty people.

I did not grow up learning about residential schools or the failure of treaties as part of my education. Indigenous history has been completely misrepresented and misinterpreted in Canadian history lessons spanning more than a hundred years. Most settler-Canadian adults today have little knowledge of past government decisions or the church’s role in the cultural genocide that a country such as Canada, that claims freedom and equity for all, was responsible for. Many still do not understand the complexities of the socio-economic struggles on reserves today. Misguided popular opinion about Indigenous issues abound. Schools must become places of active listening and truthful interpretation. Indigenous voices continue to speak up; now is the time for all of us to hear the truth. 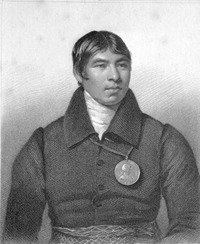 Shawundais, an Annishinaabe man born on the banks of the Black River in Upstate New York, relocated to the Bay of Quinte after fighting for the British in the War of 1812. Displacement, disease, and decimation of village life were the gifts this war bestowed on his people, but Shawundais was resilient. He was a storyteller, a man of incredible humor and wit. His audiences, both settler and Indigenous, were captivated as he told of his life before and during the war and of his current dreams.

One night Shawundais dreamed that his two deceased sons had traded in their traditional clothing for the white robes of heaven. They were beckoning their baby sister to join them. Not long after this, his daughter died, leaving Shawundais devastated. The white settlers had healthy babies. Maybe their God was true? he thought. It was soon after that dream that he converted to the white man’s religion and joined the Methodist mission under Rev. William Case, the big “black coat” man. Shawundais was no longer just a storyteller, but a missionary to his own people, and he was given an English name: John Sunday.

In 1826 the mission was relocated to Grape Island, three miles out into the Bay of Quinte. Here, the Methodist Church would keep the 130 Indigenous converts safe from the influences of the irreligious settlers, and the process of Christianization would be implemented. Within a decade, sixteen Indigenous missionaries, including John Sunday and William Beaver, would successfully spread the gospel across Southern Ontario and Upstate New York. The little community would also outgrow their island and find a new place to settle. Reverend Case secured 3,304 acres of reserve lands at Rice Lake, and by the spring of 1835, the exodus from Grape Island to Alder(s)ville began on foot and by canoe. The new settlement was named after Rev. Robert Alder, a man John Sunday met and admired on his travels to England.

Many from the community were returning to the place where their ancestors had once harvested wild rice, but with the coming of the settlers, the rice was already beginning to disappear from Rice Lake. The conditions were harsh. Some died and others nearly starved as they were forced to rebuild their lives once more, but they were resilient. The English names of those original families who travelled from Grape Island to Alderville included Simpson, Sunday, Crowe, Skunk (Marsden), and Beaver (Clark 31–59).

What would you say if I told you I have a student named John Sunday in my class? What if I told you he was the great, great, great grandson of Shawundais? This story is not fiction, but truth. It is both the story and the history of a community of people whose lives and work shaped Southern Ontario. Strangely, as a child growing up in Belleville, where I drove along the shores of the Bay of Quinte each day on my way to and from school, no one ever told me the story of Shawundais. It was not part of the curriculum.

What would you do if you had the descendant of Shawundais in your class? What if the last names of other students in your school included Simpson, Crowe, Marsden, and Beaver? Would it make you value this story more? Would it change the content of the curriculum? Would it transform learning for your students?

Ginette Mack is in her tenth year of administrative leadership at Northumberland Christian School in Cobourg, Ontario. She has worked in Christian schools for over twenty years and attended as a student as well. She graduated from the MEd program at Calvin University and loves to write about educational theory and praxis. 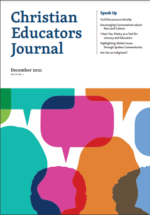