Jan Kaarsvlam has been teaching sixth grade at Ripon Christian School, but is on an extended leave since finding out that he has contracted F.B.C.A.S. (Facebook Community Addiction Syndrome) To learn more about his desperate struggle against this debilitating disease, check out Jan’s Facebook page.

“I’m not doing it!” Jon Kleinhut, the school librarian, leaned forward on his elbows in the staff room and thrust his right pointer finger into the face of art teacher Gregg “Rigor” Mortiss. “And do you know why? Because it’s stupid!”

Mortiss looked, somehow, both crestfallen and angry. “But Jon,” he whined, “where’s your sense of community spirit? If we can’t rally together around art, how will we ever find unity in the hard issues like curriculum?”

“Art? This makes my ‘Dogs Playing Poker’ and my ‘Black Velvet Elvis’ seem like works by Botticelli.”

The two teachers were arguing about a project that Mortiss had proposed and principal Bentley VanderHaar had supported. Mortiss had been approached by a local dairy, Springers’ Uberkuh Farms, which was sponsoring community art through a regional contest titled “Cows of Many and Varied Spots: Teaching (Lactose) Tolerance.” By VanderHaar’s edict, every homeroom had to paint a Styrofoam cutout of a cow with a design meant to promote “Christian unity within diversity.”

From the far end of the table, gym teacher Rex Kane joined the fray. “Jon’s right, Gregg. This project is udderly ridiculous.” A smug smile spread across his face as he looked about, waiting for the rim shot that would never come.

Ignoring Rex, Mortiss said, “Listen, guys, I know that the contest promotes some off-beat aesthetics, but let me remind you that the Springer family has supported Bedlam Christian School for two generations. They are trying to do something good for the community, and I think we should encourage it.”

Kleinhut snorted. “What they’re trying to do is sell some milk.”

Rex added, “Why can’t they make a little money at the same time? What’s your beef with capitalism?” Rex licked his forefinger and made as if he were marking another check on an invisible scoreboard.

As if summoned by a Pavlovian bell, shop teacher Gord Winkle appeared in the doorway. “Did someone mention beef?”

Mortiss’s face melted in relief as he uttered words that had never before been spoken in the staff room or any other room of Bedlam in its entire history: “Gord, am I glad to see you!”

Gord, having turned his attention from beef to the box of chocolate-glazed crullers on the staff room table, immediately looked nervous. “Why? Is this about borrowing the belt sander again? I still haven’t gotten the clay out from the last time you needed it.”

“No, no, nothing like that,” said Mortiss. “You remember how we were talking about that cow project, and how it would be a good way to unify the whole school? Well, Kleinhut and Kane are saying it is a bad idea.”

If anything, Gord now looked even more uneasy. He didn’t like being in the middle of anything, unless it was a buffet.

Rex jumped into the pause. “I didn’t say I was against it, Mortiss. In fact, I think it is a moo-velous idea. In fact, I am very bullish about the chances of this thing succeeding. The whole idea sounds cow-ptivating. I’m surprised other schools aren’t trying to horn in on it. I think we should try to milk this one for all it is worth. I’d say our big cheese has the right idea by pushing this, and I am not just buttering him up. What do you think, Gordo?”

Gord, reeling from Rex’s barrage of terrible puns, looked from Mortiss to Kleinhut, and then back to Mortiss. “I was just saying that it seemed to me that when the whole school works together on something, it is a great way to build community.”

Kleinhut exploded in verbal fury. “Right. Right. I can agree with that in principle, but what really makes me angry about this is that we are working together on an advertising campaign for a dairy! That isn’t what this school is supposed to be about! Why can’t we all pull together over something we can believe in—something that fits with that new mission statement we spent most of last semester rewriting?”

Rex wasn’t done yet. “Whoa there, Jon. Don’t have a cow. No sense in closing the barn door after the musk ox has left. Remember, the nondairy creamer will float on the top. After all, you can’t make an omelet without cutting up a few peppers. And like my grandmother used to say, it’s an early fox that can outwit a sleepy toad.”

Gord blinked several times, trying to figure out what toads had to do with dairies. Mortiss and Kleinhut, their eyes locked, ignored Rex’s chatter and Kleinhut responded. “So you are saying that the only legitimate community-building exercise is mission work? Like if we aren’t building a cement-block house for someone in Central America or collecting eyeglasses for people in Africa, it doesn’t count? Listen, Jon, I am trying to get my students to understand that making art, in any form. In fact, any kind of creating at all is an excellent way for the Christian community to brighten up this broken world. I’m not sure that the activity itself even matters. The important thing is working together!”

“I don’t know if that’s true, Gregg,” said Rex, quickly inserting himself again. “The whole thing sounds like a whale of a project. I mean, how do you know the whole project won’t flounder? This might be a good time to fish or cut hair.”

His colleagues could no longer overlook the stream-of-conscious “wordplay” from Rex. As all three stared at him in a befuddled fashion, Gord, his cheeks full of cruller and his voice full of concern, said, “Rex, have you checked your blood sugar lately? You’re not making a lot of sense.” He paused. “Well, less than usual.”

“Ah, how sweet of you to show concern over my generally sanguine nature,” Rex replied as his eyes slowly glazed. “But I’m fit as a fiddle. Your concerns are moo. . . t.”

Relieved that Rex’s puns had at least returned to bovine subject matter, Gord prepared to once again engage Mortiss and Kleinhut in their discussion about community building. He barely noticed when Rex climbed atop his chair, wobbling dangerously on his perch.

“That’s right, I’m as healthy as a harpsichord, as vigorous as a viola, and as tip-top as a tuba.”

“Rex, get down before you hurt yourself,” Kleinhut ordered.

“Don’t fret,” said Rex, his face gleaming with perspiration. “I’m bossy as a bassoon, obsessive as an oboe, titillating as a timpani! I am the Lizard King. I sing the body electric! Coo-coo-ka-choo!” With that, Rex’s eyes rolled back and his body pitched forward, his face landing squarely in the box of chocolate-glazed crullers.

What happened next has become part of Bedlam lore.

As the mass of Bedlam faculty stood around Rex’s unconscious body, stunned and apparently unable to move, an unlikely hero emerged.

Gordon Winkle had never been what anyone on the Bedlam staff would consider lifesaving material, but when he saw his friend make a face-plant into the doughnuts, something noble stirred within his heart. He stood straighter than he ever had before, and, even as he was easing Rex onto the carpet and clearing the pastry from his airway, Gord began calling out instructions. “Gregg, page the office and tell them to call 911. Jon, run down to the cafeteria and bring back some cartons of orange drink. If this is Rex’s hypoglycemia acting up, that sugary stuff ought to help. Now everyone be quiet; I need to listen to hear if he is breathing.” In a time of extreme crisis, Gord was magnificent. And if he paused to lick his fingers after wiping smashed cruller from Rex’s face, or if he took two swigs of orange drink for every sip he offered the victim, no one bothered to mention it.

Much later, after the ambulance had taken a now-conscious Rex to the hospital, and the prayer meeting at the end of the school day had concluded, Jon Kleinhut took a moment to reflect on the events of the previous few hours. It occurred to him that real community forms around the needs of people you care about, not around an advertising campaign for a dairy. Of course, Jon kept that conclusion to himself—he didn’t want to get anyone riled up again. The important thing was that Rex, crazy, distracting, unprofessional Rex, was going to be okay. And for that, even though he would never let anyone know it, Jon was genuinely thankful. 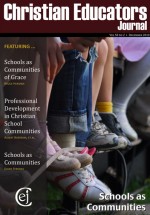