A number of years ago Microsoft ran a commercial for the Windows Phone 7. It portrayed a variety of people immersed in their smartphones while oblivious to their surroundings. The series of vignettes includes a distracted father sitting on a seesaw leaving his daughter stranded high on the other end, a hapless man absorbed in his smartphone while his legs dangled in shark-infested water, and a bride walking down the aisle while engrossed in her phone.

Prophetic voices like Marshall McLuhan and Neil Postman warned us that while we may shape our devices, our devices also shape us.

The commercial is not only amusing; it also rings true—many of us are frequently distracted by our glowing rectangles. Ironically, the commercial was promoting a new smartphone (albeit one that promised to “get you in and out and back to life” quicker). It is understandable that our digital devices are compelling—they instantly connect us to our friends and family, help us navigate roads and cities, and provide news and entertainment. Digital technology has brought blessings for education and medicine, and it has helped spread the gospel message to the ends of the earth. But many decades ago prophetic voices like Marshall McLuhan and Neil Postman warned us that while we may shape our devices, our devices also shape us. Nicholas Carr, in his provocatively titled 2008 article “Is Google Making Us Stupid?,” observes that the internet “is chipping away my capacity for concentration and contemplation. My mind now expects to take in information the way the Net distributes it: in a swiftly moving stream of particles.” He laments, “Once I was a scuba diver in the sea of words. Now I zip along the surface like a guy on a Jet Ski.” More recent research in neural science has demonstrated that our brains remain malleable and change in response to the things we do. Our technological activities gradually shape and sculpt our brains in particular ways. Gary Small, a neuroscientist and the author of the book iBrain, suggests that our “high-tech revolution has plunged us into a state of continuous partial attention” and that we “no longer have time to reflect, contemplate, or make thoughtful decisions” (18). Saint Augustine already had an inkling of this nearly two thousand years ago when he observed that unhealthy “habit, if not resisted, became necessity.” It turns out the alluring draw of many of our apps may not be simply an unintentional side effect of pleasing aesthetic design. In his recent book The Tech-Wise Family, Andy Crouch observes that the “makers of technological devices have become absolute masters at the nudge” (34).These “nudges” come in the form of alerts and notifications that reward us each time we are distracted. The business model for many services depends on revenue from targeted advertisements that require attracting as many eyeballs as possible and keeping them coming back. These nudges have become increasingly sophisticated, with some social media companies hiring behavioral scientists to help advise developers on tuning apps so they play on a user’s dopamine levels. Jeff Hammerbacher, an early social media pioneer, once lamented in an interview with Ashlee Vance from Bloomberg Businessweek, “The best minds of my generation are thinking about how to make people click ads.” [This is only part of the article. Want to read more? Subscribe to the website by choosing "Register" from the menu above. It's free!] Works Cited Augustine, of Hippo, Saint. , Book 8, Chapter 5. Project Gutenberg http://www.gutenberg.org/files/3296­/3296​-h/3296-h.htm. Boers, Arthur.  (Brazos, 2012). Carr, Nicholas. “Is Google Making Us Stupid?” , July/August 2008, https://www.theatlantic.com/magazine/archive/2008/07/is​-google-making-us-stupid/306868/. Crouch, Andy.  (Baker Books, 2017). Small, Gary.  (Collins Living, 2008). Smith, David I.  (Eerd­mans, 2018). Smith, James K. A.  (Brazos, 2016). Vance, Ashlee. “This Tech Bubble Is Different.” , April 14, 2011. https://www.bloomberg.com/news/articles/2011-04-14​/this-tech-bubble-is-different. Derek C. Schuurman is professor of computer science at Calvin University in Grand Rapids, Michigan. He is the author of Shaping a Digital World: Faith, Culture and Computer Technology (IVP Academic, 2013). 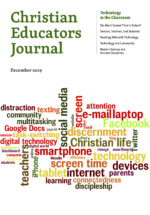