There’s a lot of talk about diversity in the academic arena, in public policy, and in the marketplace. Why should Christian educators be thinking about this? The key reason is the nature of God and his creation.

I believe the primary motive that drives the church to embrace ethnic diversity should be the conviction that diversity is an intrinsic God-value for the life and witness of the church. It is a precondition for authentic witness to the world. I’ve heard diversity argued as solely a justice issue; thus, it is left to be embraced only by those who are passionate about justice. While this is not a primary concern, it is still worthy of our attention. We need to realize that a concern for justice comes when God’s intentional design is not being met, and diversity is God’s intended design for his creation and his kingdom. If we don’t see this intended design, we will overlook the benefits and advantages that diversity brings for the enrichment of our existence.

I believe that the church has been reluctant to engage in honest dialogue on the issues that pertain to racism, racial justice, and racial reconciliation. It is important that we as Christians look to scriptural revelation as our source for uncovering the truth about human life, its meaning, and its destiny. My desire with this article is to help us move forward with God’s agenda for the church and the kingdom.

Diversity in the Godhead

We see God’s image in his image bearers—humanity—with their source not only in Christ, but also in Adam and Eve. In the Old Testament, we read: “Then God said, ‘Let us make mankind in our image, in our likeness’” (Gen. 1:26–27). This truth is repeated in the New Testament: “From one man he made all the nations” (Acts 17:26). Christianity allows no room for believing that other human beings are fundamentally different from “us” or somehow less truly made in God’s image than “we” are.

Diversity as an Intrinsic Kingdom Value

God’s diversity is evident in his kingdom. In the old covenant, God’s kingdom was racially exclusive to ethnic Israel. In the greater purpose of absolute inclusion, God put his focus on Israel to be a “blessing to the nations,” with dramatic reminders of the purpose in the lives of Melchizedech, Rahab, Ruth, some of David’s military leaders (Ittai the Gittite, Uriah the Hittite), and the book of Jonah.

This truth is also evident in the new covenant, where we see the church unfold. God’s kingdom value is interwoven throughout the word and the world. It seems that in the North American context, the church has been reluctant to promote God’s kingdom value of diversity. I believe this contributes to the church’s unwillingness to embrace ethnic diversity on many levels. The Bible teaches that society must not be ordered according to our own preferences. Instead, it is bound to God’s intended order established both in creation and in his Word. Therefore, diversity is not a quota to be filled in the church or in the workplace; it is God’s intent for the enrichment of church and society. Our embrace of diversity is an inherent part of who we are.

God is love, and there is a unity of love in the person of God – Father, Son, and Spirit. Out of that overflowing love, God chose to create a world that is wonderfully varied with plant life, heavenly bodies, landscapes from deserts to mountains, and fish and birds. Variety and difference enrich our world. There is oneness, and there is “manyness.” Diversity is an inherent feature of creation.

In Genesis 11 we read in the narrative of the tower of Babel that sin disrupted the unity of diversity, turning differences into oppositions, and placing humans in a relationship of enmity with God, with each other, and with the earth. Sin displaces the natural order and makes diversity suspect or “optional.” While Babel is usually seen as a curse on humanity, we must also see that God is moving his diversity agenda along. We must see that biblical diversity is not a consequence of sin; it is the God-given intent of creation.

Diversity in the Church

The church is the visible expression of God’s kingdom. The church, in its unity and in its diversity, is God’s strategic vehicle for bringing into being the new creation. Nevertheless, while there are great benefits to diversity, there are great challenges as well. I believe that both the benefits and challenges bring enrichment to the church, giving it a greater capacity for changing the world with the gospel. The church’s embrace of diversity as a norm prepares us for relationships in eternity. On earth, we get to practice (as much as sinful people can) for what awaits us in God’s future kingdom.

Take a moment, if you will, to consider some of the benefits of diversity to an individual, a family, a church congregation, or a community, and base your consideration on 1 Corinthians 12. The image of God in us is most fully realized in the context of a diverse and loving community. Diversity enriches the Christian experience. We learn from those whose experiences, beliefs, and perspectives are different from our own. Diversity promotes personal and communal growth, it is necessary for a healthy society, and it challenges stereotypes and preconceptions. It also encourages critical thinking and helps us learn to communicate with people of varied backgrounds. It fosters mutual respect and teamwork. Our message and witness become credible when the world sees the church building relationships regardless of color, ethnicity, or culture. It is in the context of diversity that the church grows:

“Now in the church at Antioch there were prophets and teachers: Barnabas, Simeon called Niger, Lucius of Cyrene, Manaen (who had been brought up with Herod the tetrarch) and Saul. While they were worshiping the Lord and fasting, the Holy Spirit said, ‘Set apart for me Barnabas and Saul for the work to which I have called them.’ So after they had fasted and prayed, they placed their hands on them and sent them off….
“Then Paul and Barnabas answered them boldly: ‘We had to speak the word of God to you first. Since you reject it and do not consider yourselves worthy of eternal life, we now turn to the Gentiles. For this is what the Lord has commanded us:
“I have made youa light for the Gentiles, that youmay bring salvation to the ends of the earth.”’
When the Gentiles heard this, they were glad and honored the word of the Lord; and all who were appointed for eternal life believed” (Acts 13:1–3, 46–48).

As Reformed Christians, we often say that we live in the tension of “already but not yet.” We live and work in the reality of the “already”—what God has done since before creation. A good example of this is found in the Lord’s Prayer in Matthew 6:9–13, where we pray that God’s Kingdom will come “on earth as it is in heaven”. At the same time, we live in the hope of the “not yet,” that one day the reconciliation of all things will be fully realized: “After this I looked, and there before me was a great multitude that no one could count, from every nation, tribe, people and language, standing before the throne and before the Lamb. They were wearing white robes and were holding palm branches in their hands” (Rev. 7:9).

When Christians understand and embrace the value God places on diversity, I believe that the fear of knowing and being known by others dissipates. Then we realize that diversity is the norm, not the exception, in God’s kingdom. The reality of heaven is to affect our reality now.

God’s kingdom has come and is coming. We cannot continue to hide behind a community of separation. We must live out a community of radical engagement. We are well aware that in the midst of our brokenness in a fallen world, we need God’s grace and healing if we’re going to embrace unity in diversity as a kingdom value. As believers in Jesus Christ, we need to first seek our healing within our community of faith. We need to promote and engage in cross-cultural, interpersonal relationships based on love, respect, and equality. We can no longer be diverse for diversity’s sake. We must move beyond the annual celebrations of diversity in our church communities and instead make diversity an everyday reality of life in the kingdom. Leviticus 19:33–34 provides an excellent example of what we ought to do: “When a foreigner resides among you in your land, do not mistreat them. The foreigner residing among you must be treated as your native-born. Love them as yourself, for you were foreigners in Egypt. I am the LORD your God.” We must be image-bearers who truly reflect the triune God. 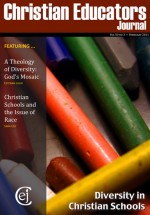