by Heather Altena and Eleanor Tiemens

Ah, newly independent readers. First through third graders are an intoxicating mix of excitement and intransigence in their reading habits. They get hooked on one genre or topic and will. not. let. go. That’s one of the reasons they love book series so much. Unfortunately, it takes time for authors to write new books, and patience is not something these readers have in abundance. So librarians and teachers have to gently guide them to other materials while they wait for the next [fill in blank with latest obsession here] book to come out.

I teamed up with my library intern, Eleanor Tiemens, to share some possibilities for diverting the minds of younger readers. They are not all great literature, but each has some redeeming factor that will make it appeal to students. In general, books in each genre will begin with younger readers and move to older readers.

I have second grade boys who asked me every single week since the beginning of the year when the next Dragon Masters books would be out. (It was in February. That’s a long time. Another will be out this summer. Also a long time.) I see why they are eager. These short, simple adventures are a great introduction to the fantasy genre. In the first book, eight-year-old Drake is taken from his home to the palace because the Dragon Stone has chosen him as a Dragon Master. The king is building a dragon army for mysterious reasons, and only children can connect with the beasts. Drake meets Rori, Bo, and Ana who are training impressive-looking Fire, Water, and Sun dragons. Drake is matched with an Earth dragon, Worm, who is dull brown and doesn’t even have wings. True to the fantasy (and biblical) theme of the “weak things overcoming the strong,” Worm turns out to be the most powerful of the dragons, despite his humble appearance. Each book in the series explores the mistakes and triumphs of the young Dragon Masters as they try to connect with the dragons, while unresolved questions at the end of each book make readers eager for the next installment.

Heroes in Training: Zeus and the Thunderbolt of Doom by Joan Holub and Suzanne Williams

Ten-year-old Zeus has been stuck on the Greek island of Crete with nothing to do for his whole life. He doesn’t know who his parents are and spends his days bored out of his mind and longing for an adventure. One day, however, Zeus is captured by half-giants who work for King Cronus. So Zeus finally gets to go on his adventure as he escapes the grasp of King Cronus’s army, flees flying bird-women, and ends up in a temple where he is greeted by an Oracle. The Oracle tells him that he is King of the Olympians and must go on a quest. Using his newly found lightning bolt, Zeus sets out to fulfill his quest and ends up saving the other Olympians who are trapped in the belly of King Cronus. This advanced chapter book relays an interesting take on Greek mythology, revealing the early years of the Greek god Zeus and his rescue of the other Olympians. A younger version of Rick Riordan’s well-loved Percy Jackson and the Olympians series, the Heroes in Training series is an educational yet humorous series for lovers of adventure and mythology.

The Narwhal and Jelly series by Ben Clanton

If you have not read Narwhal: Unicorn of the Sea and Super Narwhal and Jelly Jolt, go get them right now. Book three, Peanut Butter and Jelly, has just been released. For any children who tell you that they could never draw a graphic novel because they don’t draw very well, point out the utter simplicity of Clanton’s charming pictures. Stories of imagination and friendship make even the simplest drawings come to life.

The Cici: A Fairy’s Tale series by Cori Doerrfeld and Tyler Page

In the first book, Believe Your Eyes, Cici is devastated when she finds out that her parents are getting a divorce and that her dad is moving out of their house. And if that isn’t enough change, her abuela has also just told Cici that she has inherited fairy powers and will have to decide one day if she wants to keep them. Scared of being looked at differently because of her parents’ divorce or her new fairy powers, Cici pretends to be someone she is not and ends up hurt and without a friend. Part of Cici’s fairy sight is to see people differently—her mother has multiple octopus arms; girls at school look like chickens. Astute readers will ask what truths are conveyed in the fairy-sight images. In the sequel, Truth in Sight, Cici’s abuela teaches her to use her powers and to adjust to change. Cici discovers that she cannot change how other people act and learns not to judge people on first impressions. Abuela tells Cici, “Even a fairy cannot control who people are. But you can always change how you see them” (12). [This is only part of the article. Want to read more? Subscribe to the website by choosing "Register" from the menu above. It's free!]

Eleanor Tiemens is a senior at Chicago Christian High School. She writes online reviews for TeenReads.com and Barnes & Noble and hopes to study something reading-related in college. 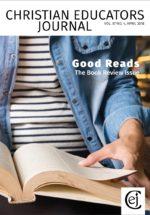