Dressed in a three-piece, charcoal gray pinstriped suit, Rex Kane squirmed in his chair at the head of the table. He fidgeted restlessly with the bold red silk tie he had chosen in the belief that it lent him an air of credibility. Before him sat Bedlam Christian High School’s curriculum committee, an august group that had assembled on this Tuesday afternoon to hear the P.E. department’s proposal for a new evaluation system for its students.

Jane VanderAsch, the head of Bedlam’s math department and one of the staff’s most senior veterans, sat kitty-corner to his right. She and Rex had been secretly dating for two months. (Which meant, of course, that everyone else on the staff had knew they were seeing each other.) Though the relationship had startled many, it had never been much of a secret, though Jane and Rex did not know this. Jane knew Rex had a good heart and that he was a man of great enthusiasm for life and unconventional new ideas. However, her newfound love had not blinded her to the fact that many of his ideas were misdirected and sometimes bizarre non sequiturs that made him the laughingstock of the faculty. She bit her lower lip nervously.

After Bentley VanderHaar, the principal, called the meeting to order and opened with prayer, he turned the floor over to Rex.

Stealing a quick glance at Jane, who was staring nervously at her own hands, Rex cleared his throat and said, “As many of you know, the P.E. department has, at various times in the last ten years, been in trouble because of the grades we issue to our students. Ten years ago, we were accused of being an easy A for students, and—ironically—in the last two years, we have had five complaints, all from the same parent, that our courses are too difficult.”

English teacher Christina Lopez took a swig from her water bottle in order to stifle a chortle. Who was this “we” for whom Rex was speaking? A school Bedlam’s size had only one gym teacher, and Rex was it. Well, Christina thought to herself, rex is Latin for “king.” Perhaps he is using the royal “we.”

“Now, some departments,” Rex continued, “for instance, the math department, has what we in the P.E. department like to call, ‘The Goldilocks Grades.’ That is, people like Jane here give assessments that are neither too hard nor too easy. No, her assessments are always just right.”

Jane smiled a bit too widely, and something in her expression reminded Lopez of the leering grin of a Shakespearean clown. Jane blushed as her eyes darted to Rex’s face. He winked at her. Then he reached into a leather satchel on the floor beside his seat and dramatically produced a manila folder, which he slapped on the table in front of him.

“So here is how the P.E. department proposes that if finds its own ‘Goldilocks Grades.’ We would grade students in response to thirty-seven outcomes based on a combination of state standards, national P.E. standards, and several common core standards in both literacy and science, which of course, physical education is.”

Bedlam’s honors physics teacher, Don Loonstra winced. He thought Rex Kane wouldn’t know the scientific method if it ran over his grandmother with a semi-truck full of test tubes.

“Further,” said Rex, “I have developed a separate rubric for each of the thirty-seven outcomes which you will find begins on page forty-five of the proposal.” He took out a large stack of plastic spiral-bound documents and handed them around. “Each rubric has at least three areas of focus and is graded on a scale consisting of exemplary, proficient, basic, and not attained. So we add up all the scores and then divide out the results, thereby creating a standard bell curve. This allows us to separate out the students who need interventions or additional differentiation for further work. At the end of the semester, the computer assigns each student a composite score, which means that we can set the parameters on our online grading program in a flexible manner to guarantee 33.3 percent A’s, 33.3 percent B’s, and 33.3 percent falling below the B level.”

Rex paused. Principal Bentley VanderHaar smiled broadly. He was amazed that Rex had come up with this on his own—though perhaps Jane had helped. At any rate, he could picture himself standing with Rex in front of an awed group of P.E. teachers and principals at the next Christian teachers’ convention as they co-presented on the topic of “Assessment in P.E.—Is There a Difference?” He cleared his throat and said, with as much pride and positive reinforcement as he could muster, “Excellent work, Rex! When are you going to start this wonderful new assessment program?”

Rex fixed him, and every other member of the committee, with his most intensely piercing gaze.

“I’m not going to,” he said pleasantly.

“What?” VanderHaar sputtered. “Why not?”

Jane VanderAsch tensed up, wondering what Rex was doing. Every other member of the committee except VanderHaar relaxed visibly. This was the irrational sort of move they had come to expect from Rex. What followed, however, was remarkably sensible.

“Look,” said Rex. “I did all this to show you that it isn’t that I can’t do all this stuff! It isn’t that I want to avoid the work of it—that I am too lazy or close-minded to imagine it. But now that I have jumped through your hoops, I want you to listen to me a second.” Rex drew a deep breath.

“I know most of you think P.E. is just fun and games—and actually that is part of it—but the thing that is most important to me is to get my students (all of my students!) interested in living a healthy and active life. To do that, it is really important to me that all of my kids find an activity that they love and that all of my kids succeed. Some of my students love sports and work really hard at what they do. Some of my students would be a whole lot happier if they never had to set foot on the gym floor unless we were having a play, band concert, or honors assembly. If I apply the same standards to all of my students, guess what happens? The kids who need PE the least—my athletes—get straight A’s. The kids who need P.E. the most—the ones who haven’t yet discovered that staying active matters in their lives—they get the D’s and the F’s. In the physical education sciences, we call that scenario a lose-lose. And it turns out, my friends, that the thing I most want to measure—their level of involvement and enjoyment—is the hardest thing to measure objectively. If I give every student who puts on a brave face and tries something new an A, I’ve maybe got a chance at changing their mind. And if I can give an athlete a B when he and I both know he isn’t really trying, I may be able to inspire him to work harder—whereas if I am trapped by a rubric I can’t do that. So I ask you to carefully consider the proposal I have given you and then throw it away and let me do what I need to do to reach my kids.”

Rex turned on his heel and, with a surreptitious wink at Jane VanderAsch, tromped out of the room. Christina Lopez knew the discussion that was going to follow would be long, but she smiled anyway, because it occurred to her that even a screwball like Rex could make some pretty important points if he wanted to.

Columnist Jan Kaarsvlam and his new wife Della Telly visited scenic Griffith, Indiana, for their honeymoon. While there, Jan made a presentation at Crown Point Christian School on reaching a gluten-free generation. Principal Carol Moxey was so impressed that she offered him a position teaching science in the junior high. He and Della are talking over their offer as they finish their honeymoon tour of The Romantic Road of the Rust Belt. 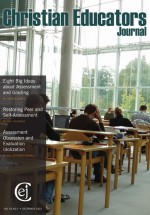