“Ungrading” is an umbrella term for a wide range of instructional and assessment practices; some other common terms for these practices are “de-grading” and “going gradeless” (2). What all of these practices have in common is that they create structures and processes that direct the attention of students and teachers (as well as other stakeholders, such as parents and academic departments) toward the process of learning by directing their attention away from the ratings (marks or grades) that are attached to the artifacts of the learning process. In recent years, there has been an increasing amount of practitioner-focused, “how-to” literature on ungrading. Ungrading: Why Rating Students Undermines Learning (and What to Do Instead), edited by Susan D. Blum, gathers together some of the fruit of that literature and provides it with a shared scholarly foundation: “Based on rigorous and replicated research, this is the first book to show why and how faculty who wish to focus on learning, rather than sorting or judging, might proceed” (jacket description).

As both Susan D. Blum and John Warner point out in their contributions, unlike other approaches to reforming grading (such as developing and using highly detailed assessment rubrics), the point of ungrading is not to make the process of responding to student work easier, quicker, or more efficient for the teacher. In fact, ungrading can sometimes require more and longer work than conventional grading does! What it does do is offer the promise of better work, work that is focused on appreciating what students have done and helping them toward doing it better in the future, rather than picking apart what they have done in order to rate and judge it (212–14, 219).

The book consists of thirteen essays, organized in three parts, plus a foreword by Alfie Kohn and a preface, introduction, and conclusion by the editor, Susan D. Blum (who also contributes one of the thirteen essays). The parts are entitled “Foundations and Models,” “Practices,” and “Reflections,” but those groupings reflect general emphases of the various pieces rather than hard distinctions among them; the three-part structure seems to have been introduced by the editor after receiving the submissions, to give a sense of shape and flow to the collection, rather than to have guided the commissioning process. In fact, every contribution contains some statement of foundations and models, some description of particular teaching practices, and some reflections on the implications of those practices. While the book can be profitably read straight through from beginning to end, individual readers (or better yet, groups of colleagues reading and discussing together) might find it engaging to take a more dynamic approach, beginning with the foreword, preface, introduction, and part 1, then allowing their particular interests to guide their selection of what to read first in parts 2 and 3 (which are relatively more focused on specific case studies from particular courses, disciplines, or educational levels), before finishing with John Warner’s “Wile E. Coyote, the Hero of Ungrading” (the last chapter of part 3) and the editor’s conclusion, “Not Simple but Essential,” in which she not only looks back but also traces several areas for further investigation, experimentation, and reflection.

All of the contributors to this book describe the ways in which they have worked to de-emphasize grades, while still working in educational systems that do, at some point, require grades. (For this reason, perhaps the term “ungrading” might be better written as “un/grading,” or, as in the book’s cover art, “UNgrading”). This realistic, practical focus on working within the existing system means that the authors largely give their attention to decisions that are within the agency of individual teachers, although both Alfie Kohn in the foreword and Susan D. Blum in her essay “Just One Change (Just Kidding): Ungrading and Its Necessary Accompaniments” point out that making an incremental change in grading practices often reveals the need for more profound changes, and can even stoke the desire for system-wide overhaul. If you’re looking for a few small, easy changes in your teaching that will leave you feeling permanently satisfied, beware this book. This is an abridged version of this article. To read more, subscribe to the print or digital edition of Christian Educators Journal.

Ungrading: Why Rating Students Undermines Learning (and What to Do Instead), by Susan D. Blum (Morgantown: West Virginia University Press, 2020)

Danielle Daujatas is a preservice teacher, majoring in special education and minoring in philosophy, at Trinity Christian College in Palos Heights, Illinois. Aron Reppmann is a professor of philosophy at Trinity Christian College. They have shared various experiments in ungrading together in Aron’s courses, and reading and reviewing this book together provided an integrative capstone to Danielle’s studies in philosophy and education in the final semester before she embarked on her student-teaching internship. 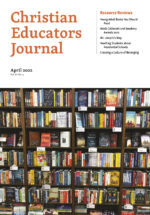