Bedlam Christian School had been closed for four days after the accident. This was their first day back. A glum and heavily bandaged Gordon Winkle sat at the table in the Bedlam faculty lounge, his finger lightly tracing the burnt stubble beneath his nose where his once glorious moustache had resided.

No one sat beside him. No one really knew what to say. After all, how do you address a colleague who burned down nearly a quarter of the school building? How do you comfort someone who is facing the possible end of his career? How can you reassure someone who destroyed the principal’s car and was now the subject of an investigation by the insurance company, a probe by the school board, and the ire of his colleagues? Even Rex Kane, the erstwhile PE teacher who would normally befriend his portly pal, was now in a separate corner of the room, his back to the shop teacher as he fiddled surreptitiously with something inside his coat. So Gord sat alone, staring absently into space.

English teacher Christina Lopez walked into the lounge, placed a bag of popcorn into the microwave, and punched a few buttons. She then turned to the rest of the room, her nose scrunched up and her eyes watering.

“What is that horrid smell?” she demanded. Gord did not respond. He had showered a half-dozen times to rid himself of the smoky odor, and was certain he was not the source of the smell.

“Yeah,” said Cal VanderMeer, looking up from the newspaper he was reading. “I thought I smelled something funky too. Kinda like a skunk.”

“More along the musky line, I think,” noted Cal. “What do you think, Rex?”

Rex, who had his back to all of them, threw a nervous glance over his shoulder, then stared back at his own lap as he said, “Yeah, I could go for a pizza too.”

This comment surprised no one, as Rex was famous for his non sequiturs. But the shifty behavior was unlike him.

“What do you have there, Rex?” Christina asked.

Christina crossed the room. As she approached Rex, he turned away and huddled over his lap.

“Geez Louise,” Christina said, cupping her hand over her nose. “It smells awful over here, Rex. When is the last time you changed your socks?”

Alarmed, but still determined to see what Rex was concealing, Christina grabbed him by the shoulders and spun him in his chair. A look of guilty pleasure on his face, he cradled what appeared to be an adolescent ferret. The ferret, wearing a miniature Bedlam varsity sweater, snuggled against Rex’s chest, and seemed to grin at a horrified Christina.

Meanwhile, Christina’s forgotten popcorn had slowed its popping, then stopped entirely, and then began to smoke. Just as Christina’s scream broke free, the bag burst into flame inside the microwave. The smoke alarm in the room sounded, and Gord immediately bellowed in pain, dove under the table, and curled into a ball.

He was there again—the flames hissing, the acrid smoke filling his lungs, the meatball sandwich—oh, the sandwich—disappearing into the blaze. Above all, the feeling of utter hopelessness. He was having another flashback …

It had been a busy day. Gord had arrived at school at 5:30 that morning to work on some of the sets for the upcoming musical version of “Do Androids Dream of Electric Sheep?” An emergency faculty meeting just before school preempted his planning time. Then chapel ran over by twenty minutes, shortening all the periods in the rest of the day. When lunchtime arrived, he spent ten minutes teaching Rudy Menchner to run the drill press for his independent project creating a replica of a Tardis (whatever that was). The whole morning he had been craving the remaining eighteen inches of a three-foot meatball sandwich he had brought for lunch. He bought one every Saturday at Rigatoni’s Ristorante, the “Home of the Meatball as Big as Your Head.”

He made it to the teacher’s lounge just as the first bell for fifth period rang. With a sad whimper, he had grabbed the sandwich from the fridge (still cold) and hurried back to his room.

Fifth period was Advanced Auto Mechanics. The students were going to learn to change the oil in different kinds of cars. Gord had put out his usual call to the faculty for volunteer cars, and so Jon Kleinhut’s vintage Camaro and Principal VanderHaar’s minivan were up on the lifts. They had gone over the procedure in class the day before, so Gord got the two student teams started and proceeded to watch them from his desk. He was famished by that point, and so he did what he had often done: he wrapped the meatball sandwich in aluminum foil, clamped it very gently in a vise, and wheeled the acetylene torch over to warm up the sandwich and toast the bread just enough. He was mere seconds from toasty, meatbally goodness when Irwin Smith and Joann Nye had a disagreement about which was the right wrench for the job. These arguments had been constant ever since prom (Irwin had asked Joann and she had agreed, but he had been very upset when he picked her up and she was wearing a dress made of duct tape. Gord had seen the dress. It was marvelous. He didn’t know what Irwin’s problem was.) At any rate, Gord figured he would shut down the torch and go help them work it out, when apparently the wrench that Joann was holding while gesticulating wildly flew from her hand, across the room, and hit Gord on the back of the head.

Jan Kaarsvlam is a former Christian School teacher and freelance writer who has decided that he would be an excellent chaplain for Redeemer University in Ontario. He has written to them, describing his new idea for having a spiritual development retreat based on a cross between the television show Survivor and the videogame Grand Theft Auto. He is awaiting an offer of employment. (He welcomes counteroffers from Dordt, Trinity, King’s, and Calvin.) 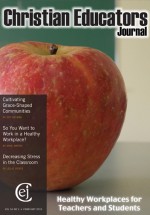