As noted by Steven Garber in his introductory acknowledgements, “One gift of this study has been a deepened understanding of the role that my own teachers have played in my life” (11).

The impact of teachers and their leadership within the craft of learning is significant to the education of the next generation. Steven Garber’s book The Fabric of Faithfulness: Weaving Together Belief & Behavior During the University Years offers a collection of chapters in which learning for life, care, and competence—within the context of educating from a Christian perspective—can be explored, while also providing useful reading for personal or interdisciplinary research ventures.

Through a tapestry of eight chapters, the author presents a variety of perspectives across three main themes: the relationship between ideas and responsibility, the moral need for a purpose for education, and the ability to connect learning to life. All of these themes flow from the common precept that Christian education is significant and offers a great deal more to students than mere cognitive expertise.

This review will explore each of these themes briefly, discuss how each adds to the literature already written, and conclude with other considerations that make the book a significant addition to a teacher’s professional library.

Theme One: The Relationship Between Ideas and Responsibility

With experience as a teacher himself, Garber does an exemplary job of exploring the haunting questions behind the teaching life—for example, “Why do I teach every day and what makes teaching worthwhile?” Any teacher, on a bad day, will consider this a pertinent question. The thesis of Garber’s book is that for moral meaning to form, students must have a vision of integrity that connects belief to behaviour personally and publicly, and that only a deliberate and solid worldview connection can address the challenge of coherence and truth in our current society. It is from this premise that the first theme, the relationship between ideas and responsibility, becomes grounded.

The relationship between ideas and responsibility requires an intentional connection between what is believed and how that belief is lived out in “habits of the heart.” Of course, Garber is not the first writer to form such a conclusion. He does have some subtle nuances to add to the work of others (Bertrand, Bauman, Hollinger, Bartholomew & Goheen, Buford, Postman) in his emphasis on habit and intentionality as being essential to educational practice that fosters life skills extending “after schooling.” The authors mentioned above focus on faith and its resilience, but not to the same extent on the need for education to train for resilient faith to be possible.

In essence, Garber notes that an intellectual assent to a belief is not enough. A belief must then be embodied in order to be seen, to be consequential. By default, Garber proposes that faith requires action beyond assenting to an idea or else it is irresponsible. However, Garber’s link of ideas and their intentionality would be even stronger if it were more salient and inclusive of the “social critic” emphasis proposed by writers of similar belief, be they Christian or otherwise (Postman, Sacks, Anderson). Such authors contribute a stronger example of consequences to life beyond schooling than Garber does, due to an ability to see interdisciplinary links over time and across generations from a historical, and perhaps more “story-telling” perspective. Since teachers are to equip future citizens for life, this is not an insignificant point of reference. For this reason, I would suggest that Postman’s book, The End of Education, become a companion book to any reader of Garber’s book, providing a binary opposite for rich discussion on the distinction of Christian perspectives on education. This provokes thinking, and differentiates between mere “schooling” and thoughtful educational practice. Since it has been established that linking ideas to responsibility is essential to any worldview, it is now necessary to move from the concept of cognitive practice to the moral aspects of education.

Theme Two: The Moral Need for a Purpose for Education

Garber approaches the need for a moral purpose for education as being essential to the task and craft of teaching. He proposes that the morality and purpose of a person is as significant as the process of linking ideas and being responsible for actions, noting that “becoming a person of intentionality requires the weaving together of convictions, character, and community” (37, 38). Like Postman, Garber reminds the reader that the “end” of education, its telos, will drive its practice personally and publicly over the course of life. This idea is echoed in the work of others (Blomberg, Malik, Schwehn) who stress the idea that epistemology, character, and community are intertwined as not only aspects of character formation, but also as essential components for educational service after schooling ends. Such thoughts come together as educational landscapes in the work of Palmer, who explores the life of a teacher and the daily challenges of living a life of faith with integrity before and with students. This concept is held in paradox to statements by Boyer, Buford, and Eliot, who cite failings of institutions to keep moral education central to the task of teaching and learning.

In this section, Garber uses the words morality, meaning, worldview and way of life in ways that link them beyond mere ideas to active pedagogy and practice. Thus, Garber employs concepts (formerly considered to be too modern to be discussed) as essential for the survival of robust and meaningful learning in any era, showing that these lead to a faithful and well-grounded vision of an alternate reality, of what might be. As Garber notes, “ways of knowing are not morally neutral, but morally directive” (60). But the nagging question remains: What does good connection of these principles to institutional practice look like? This question leads to the final theme.

Theme Three: Connecting Learning to the Life of Educational Practice

In Garber’s concluding chapters, he emphasizes the need for mentors, reflection on teaching, and a guiding narrative as being essential components for incarnating a worldview that will sustain the challenges of life and learning. Unfortunately, this book ends at the most significant part! The reader has the idea to be responsible and the purpose of making it meaningful, but only directives rather than examples for making it sustainable. Granted, this is a complex issue, but it is not an isolated one. Many teachers are grappling with how to put this into practice, to craft and live an educational story before their students on a daily basis—both in and out of the classroom. Perhaps this is what makes this book essential for the Christian teacher. It will get educators networking, face to face, or e-mail to e-mail, and may provoke the desire to read the writings of others who are plowing the same field, so to speak.

Garber’s emphasis on story and the need for it as an anchor to teaching is enhanced by the use of and need for metaphor as a statement of educational practice. I have a metaphor for my teaching, and I state it to my classes so they can both understand where I am coming from and also hold me accountable to it. Work by E. Botha is helpful in this regard. Aspects and ideas for moving from such theory to practice are engaged by E. C. Belcher on the significance of metaphor and story in the task of teaching and learning. But in the end, as Iris Murdoch states, “at crucial moments of choice, most of the business of choosing is already over” (37). The biggest miracle of story is the hope it brings. Educators have two roads of service. They can choose to become mirrors of society or compasses for society. Garber tells us to be compasses, and to be harbingers of hope. For that, we need his book to remind us on our darker days that teaching does make a wonderful difference, and in that reminder, we have courage to become the story we tell.

In closing, I shall briefly cite other work and references that may be helpful to the reader in this regard, but will not replace the first step—finding a mentor. Nothing written will ever replace active engagement with another person. 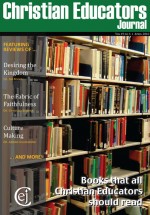