“Well, I think it is stupid!” said Red Carpenter. “I mean, the golf team hasn’t had new polos for two years, I have been telling the school board for over a decade that we need to rubberize the track if we want to stay competitive, and we still have only two class sets of Chromebooks. And what do they want to spend money on? Carpeting the auditorium? Stupid.” Carpenter slammed his coffee mug down on the staff room table, sloshing its contents over the brim onto the papers he had been grading and also, alas, breaking the handle off his favorite mug. A gift to him from his golf team, its side read, “Golf isn’t everything. It’s the ONLY thing.”

“Settle down, Red,” said seasoned math teacher Jane VanderAsch. “The carpeting in that auditorium dates from the late eighties. No one has any idea what its original color even was. It is spotted with coffee stains, chewing gum marks, powder burns from the physics demonstrations, and several stains that I would rather not know anything about. Besides, with Maxwell’s new Sacred Space Initiative, this is priority.”

“Stupid,” Red muttered as he wiped up the mess with a paper towel. He played with the handle of his mug, testing whether the break was clean enough for him to glue the pieces together again. “None of the kids even like chapel. What is Stubby Gatusso going to care about new carpet?”

Jane crinkled her face. “Must you use that horrid nickname? Besides, Stewart is hardly a good example. He doesn’t care about anything as far as I can see—certainly not my Geometry class.”

Red had just fitted the handle back to the mug in a way that seemed to hide the crack. Nodding with satisfaction, he turned toward the door only to get clobbered when veteran Bible teacher Cal VanderMeer came through. The mug slipped from his hands and shattered when it hit the floor. “Oh, great. Thank you so much.”

“I am so sorry,” Cal said as he stooped to help pick up pieces. “I should have slowed down, but I was too excited to share the news. The new carpeting is going in by the end of the week!”

Red shot a look at Jane. “Now you’ve got reinforcements?”

“Reinforcements for what?” asked Cal.

“Red thinks that we can continue to have chapel in a disgusting pit and call it a sacred space and it will be fine,” explained Jane.

“Hmmm,” said Cal. Then there was silence for a bit.

“That’s it? Aren’t you going to call me a heathen for caring more about . . .” Fumbling for words, Red stared at the ceramic shards in his palms. He thrust them in Cal’s face. “More about golf than chapel?”

Cal gently pushed Red’s hands away from his nose and said, “I’m really sorry about the mug, Red.”

“Forget the mug!” Red snapped. “Jane here thinks I’m a pagan because I think there are better ways to spend $15,000 than recarpeting the chapel.”

“Exactly!” Jane said. Her chin swung toward Red like the prow of a proud ship turning into the battle. “That old carpeting is shameful.”

“So is the old track, the old band room, the old science lab equipment,” Red replied. “Lots of things around here are out of date, so why concentrate on a room we only use for three hours a week? That is frivolous, prodigal spending when we have so many needs.”

Cal scratched at the back of his head. “You are right, Red. We do have a lot of things that need fixing here. But right now the school board has adopted Maxwell’s Sacred Space Initiative. Isn’t chapel the most obvious fit?”

“Is it?” Red said dangerously.

“I’m not so sure about that,” Red replied. “Let’s ask Mr. Calvin ‘Reformed-Boy’ VanderMeer here, shall we? Does God live in a house built by human hands, Cal?” [This is only part of the article. Want to read more? Subscribe to the website by choosing "Register" from the menu above. It's free!]

Jan Karsvlaam teaches industrial arts at Calvin Christian High School in East Chester, Pennsylvania. He has recently designed an educational video game called Curricular Rumble, which pits avatar versions of educational reformers Charlotte Danielson and Robert Marzano against each other in a cage match to the death. He admits that initial sales have been slow. 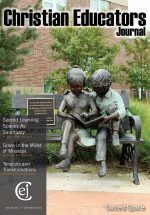