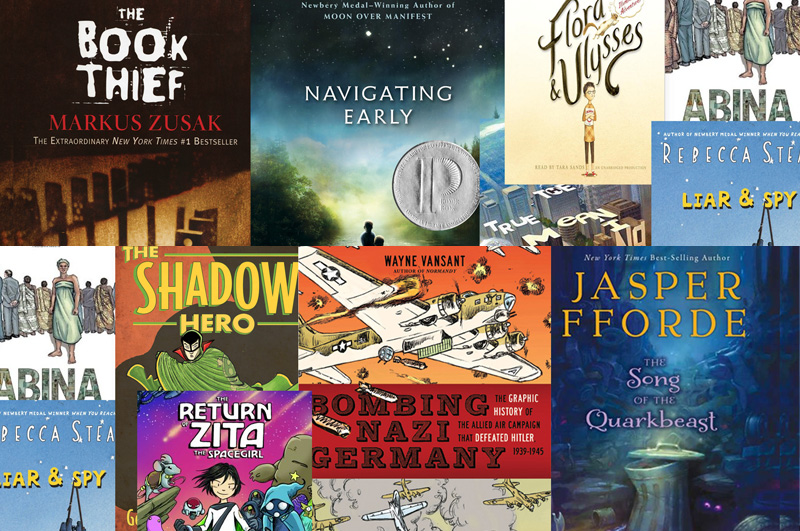 If you haven’t read it yet, do so now.

Actually, that is my whole review. But if you want don’t like being commanded to buy a book and want some reasons, here they are: The voice of the storyteller is masterful; the story is utterly gripping; the entire book is moving. You and your students need to read it. There is enough here to make this a great book to study in a high school English class; it includes a lot of history as well.

I could tell you the plot, but there is no way I can do justice to the writing, and without that, the plot won’t mean much. In short, it is about Germany in World War II. It is about a little girl named Liesel. It is about family and sacrifice and justice. It may possibly have made me cry. Every book-loving friend you know has read it and loved it and recommended it to you. They are your friends. Listen to them. You won’t regret it.

In 1876, in the Gold Coast of West Africa, a young woman named Abina Mansah is sold by her husband to be a servant in the household of an influential and wealthy palm oil planter named Quamina Eddoo. Slavery was illegal in the Gold Coast, then a colony of Great Britain, but it was practiced widely and without fear of reprisal.

Abina escapes Eddoo’s household and seeks help from an African court translator named James Davis. With his help, she files court papers and is granted a trial. At that trial, she seeks to confront the colonial authorities with the injustice of having written law that was not enforced.

This is a fascinating and surprisingly gripping courtroom drama, and it is based on a real and recently discovered court transcript. Getz and Clarke have turned this story into a remarkably accessible graphic novel that will appeal to students in middle school and high school. The art is excellent, and they do a nice job of using the panels to tell the story, but that isn’t the only reason that I love this graphic novel. Although historical graphic novels are a great way to engage students in real human stories, they are sometimes criticized because the creators have to make interpretive choices (especially one like this when no photographs of the participants exist). And this, so the argument goes, means that the authentic history is diluted. But any book that describes history makes many interpretive choices, putting some information in the foreground and some in the background, using some photographs and not others, and including some facts and not others.

The wonderful thing about this book is that it responds to that argument by including both the sixty-five-page graphic novel version of the story, and also six essays that provide context for the story, describing geography, political context, sociological context, the influence of the church, the slave trade and the abolitionist movement, and what we know of Abina Mansah. It also contains a reading guide and some suggestions for using the book in the classroom.

Jack Baker does not want to go to boarding school, but his father is in the military, and since his mother’s death, it seems like a good solution. At school, he meets an odd kid named Early Auden; by befriending Early, Jack guarantees that he will never fit in. One of the things that makes Early strange is that he reads the number pi as a story, one in which he thinks he is living. (I know that sounds hard to imagine, but it makes total sense in the story.) When the holiday break begins and Jack’s dad does not show up, Jack decides to go with Early on a journey to find out the truth about the great Appalachian bear and the school’s legendary hero, The Fish.They set out by boat and soon find themselves dodging criminals, living in the wild, and discovering the answers to questions they didn’t even know they were asking.

This is a great book for fifth or sixth grade and up, especially for boys, although there is plenty here to keep any reader busy. The realistic detail makes this a good book to introduce nonfiction readers to fiction, especially those who claim they don’t like made-up stories. There are enough themes here to make this not only a good read-aloud book, but also a book worthy of study in language arts class. Your math classes would enjoy it as well.

I loved the first Rebecca Stead book I read, When You Reach Me, but in order to really enjoy that book, you should have read Madeleine L’Engle’s Wrinkle in Time. That made her first book hard to recommend universally. And then I read Liar and Spy.

I could tell you that this book is a cross between Holes (for the surprise twists), Harriet the Spy (for the humor and the idea of kids spying on adults), and Sleeping Freshmen Never Lie (for the sequence in the science lab). I could tell you it is about a seventh-grade boy named George who moves into a new apartment building with his family and meets an odd twelve-year-old named Safer, who enlists his help to spy on a mysterious stranger who lives in their building. And I could explain the three other subplots that are woven around that story, especially the one where the nerds band together and defeat the bullies (at least for a little while), but that really wouldn’t give you the flavor of the book. I could tell you there are some excellent themes about fear and courage, truth and untruth, friendship, independence, and nonconformity subtly woven into this book.

But none of that would get across how much fun this book is, how delightful its characterizations and twists and turns are, and how, when I finally figured out the final revelation, it made me a little sniffly for a second. This book would be great fun to read aloud to fifth graders and up, it would be a great book to give as a gift or to add to your upper elementary, middle school, or even high school classroom.

The only way I am going to get all that across is if you read it. Can you do that for me? Then we’ll talk.