As I write this, spring break is only three days away (so my students tell me!). This means that we are also only three days away from April, the month of the CEJ book and resource review issue. I am excited to report that we have reviews of around fifty-five books, podcasts, blogs, publications, and websites for educators and administrators of all disciplines and grade levels!

In order to tie our February issue on hosting international students and teaching abroad with our upcoming resource review issue, I conducted an interview with Noah Ward, a missionary currently serving in Monglia with his wife and children. It was Noah who introduced me to Jayson Georges, author of The 3D Gospel for Guilt, Shame, and Fear Cultures. As a result of this introduction, Jayson wrote a thoughtful piece for our February issue, making us aware of the importance of understanding honor-shame cultures.

Noah explains that after reading The 3D Gospel, “My eyes were opened immediately to how my way of thinking was hindering my ministry.” I hope that the April issue will introduce you to resources that open your eyes to: the introvert in your classroom (Quiet: The Power of Introverts in a World That Can’t Stop Talking), the importance of our Reformed heritage (Does the Reformation Still Matter?), and stories that will reach every one of your students exactly where they are (What the Cat Saw, The Wild Robot, Scythe, to name a few).

In the meantime, enjoy this interview with Noah Ward.

CEJ: Briefly tell us about yourself and the work you do.

Noah Ward: I live in Texas as a child but spent my summers in Florida. I graduated from Trinity Valley School in Ft. Worth Texas and then went on to play soccer and get my bachelors degree in mathematics from Centenary College of Louisiana. I currently reside in Lopburi, Thailand. It is about an hour and a half north of Bangkok. I am part of a ministry called Sattha, which is part of OMF Thailand. In this ministry, I work throughout the central region doing leadership training, sports-ministry development, and church planting. This is all done alongside the local indigenous church. I have spent the past twelve years in Asia in various ministries. I taught for two years in Thailand at an international school, one year in Thailand at a local secondary school, seven years in Hong Kong at an international high school as a math teacher and dean of student life. Then I spent a little over one year in Mongolia directing a nongovernment organization focused on using sports for community development in the slums. Most of my work has been focused on secondary and university students. I have been married for six years, and I have two boys age two and four.

CEJ: How does a math major from Texas end up doing sports ministry in Asia?

Noah: It is all due to my mom. I was graduating from college, and thought I would return to Texas to do ministry as a teacher and settle down. I was a small-town boy and that is what all my childhood friends were doing. However, I had a short-term missions offer to go to Ethiopia for six months to coach soccer at a community center. My mom said she skipped on a similar opportunity when she was younger and that was one of her biggest regrets. I took her advice and my worldview was forever changed.

CEJ: Having grown up in Texas and attended college in Louisiana, moving to Thailand must have been quite an adjustment. You must have experienced some culture shock.

Noah: It was actually not as bad as I thought it would be. I took a job teaching at the International Community School of Bangkok. The orientation program and local support the school offered made the transition quite easy. Bangkok is also a unique city that offers multicultural food and amenities.

The biggest culture shock was how teachers are treated. In Thai culture, teachers are on the same level of respect as doctors and lawyers. Parents view you as an additional parent. I had parents ask me to discipline their child for home behavior, tell their child to stop playing video games, and tell their child to go to extra math classes. On the flipside, parents valued the mentoring role of the teacher. On many Friday nights students would meet with me for Bible study or hanging out. It was a culture that made discipleship opportunities very natural for a teacher. However, one challenge within this was that I didn’t truly understand Thai culture and social expectations at the time. This made deeper ministry with the Thai students much harder.

CEJ: In our February 2017 issue of the Christian Educators Journal, we included an article by Jayson Georges identifying such cultures as “honor-shame” cultures. I found out about Jayson’s work when you spoke at my school (Unity Christian High School). In talking about the work you were doing, you introduced us to the term “honor-shame” and referred regularly to what you learned in Georges’s book The 3D Gospel: Ministry in Guilt, Shame, and Fear Cultures. At what point in your work did you discover Georges’s book, and how did it help you in the work you are doing?

Noah: We had recently left teaching at a school in Hong Kong and decided to do ministry for a few years with a humanitarian aid organization in the slums of Ulaanbatar, Mongolia. We lived at a community center and worked with the suffering poor. We had no running water or indoor plumbing, and temperatures nine months out of the year were below freezing. I remember sitting in my house in the slums, looking out the window, frustrated by many aspects of life there, wondering why Mongolians did things the way they did. The main reason for this frustration was that I felt they handled certain situations the wrong way. I felt I knew the better way. It was a moment of culture shock. A moment of thinking my culture and way of approaching things was better, and boy was I ever wrong!

Those thoughts brought me to google, scanning for any info on missions and culture. I happened upon The 3D Gospel by Jayson Georges through one of my searches and, since it was short, decided to give it a read. My eyes were opened immediately to how my way of thinking was hindering my ministry.

For instance, a few weeks before, I had a security guard try to kill another employee with a spade shovel because of a dispute over something minor. This blew my mind. I drove down to the location of the dispute and told the security guard he couldn’t behave this way. I would be forced to call the police if anything else happened. He threatened my life in return. After another fifteen minutes of talking, things settled down, and I left. Little did I know that I had brought shame on the security guard and his family. His sister and her husband were both very involved in our ministry, and they felt they needed to quit working for us. I was so confused as to what happened.

The sad truth in all this is that I had no clue I had done anything wrong in the situation. After reading The 3D Gospel, I soon realized that I approached the security guard with a mindset of guilt-innocence, but he lives in a culture of honor-shame.

It is so important, especially in honor-shame cultures, that we handle conflict in a completely different way.

When I was teaching, I had a parent come to me about another parent, complaining that my homework was not hard enough. What that parent was doing was helping me save honor by not confronting me directly. As a teacher, I was perturbed that the parent didn’t come to me directly. All the parent was trying to do was honor me by not confronting me. It was a sign of respect. The 3D Gospel talks a lot about these scenarios and how we should approach them so as not to damage a relationship.

CEJ: While most of our readers reside in the US and Canada, they have international students in their classrooms who come from honor-shame cultures. How would you suggest schools in the West use The 3D Gospel to help in these interactions?

Noah: The book does a great job of preparing its readers to work with people who come from different cultures. As teachers in an international school setting, we would often get together to discuss deeper student issues from both academic and cultural perspectives. These meetings brought in different ideas and allowed us the opportunity to evaluate the context we were facing.

For instance, in honor-shame cultures cheating is not viewed as bad. Cheating is viewed as helping your friends (the community) achieve a better result. If you get caught, it is viewed as bad but only because of the rules laid out by the school.

CEJ: How do you address the issue of cheating with students who do not feel it is wrong, especially when the culture they come from says it is not wrong?

Noah: This book has many examples and suggestions to help you better understand what your students are thinking and what their motives are for the choices they make. Looking at the examples in The 3D Gospel and other case studies is a great starting point.

There is a definite need for teachers to understand the various cultures they are encountering. Knowing your students and their home lives will better equip you to teach the whole student and connect with them on a deeper level. This, in turn, will open doors for you to share the Gospel with them and with their families.

Interview by Mark Brink who is the editor of CEJ and an English teacher at Unity Christian High School. 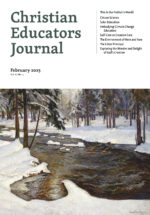