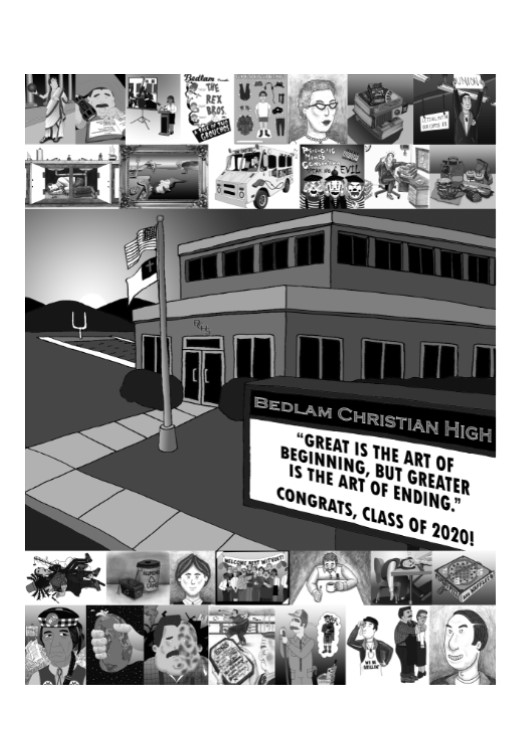 Bedlam’s principal, Bentley VanderHaar, should have been relaxed. It was springtime, his favorite season. Trees were budding, flowers sprouting, and he was making arrangements for Bedlam’s graduation ceremonies. Apart from the incident with the black-footed ferrets and the peanut butter, there had been little mischief from the students. VanderHaar, however, was not relaxed. Intention slips had gone out to faculty back in January, and over half of them still had not been returned. VanderHaar scheduled meetings with the holdouts for today. He lifted from his desk the crystal apple that he received back when he had been a humble history teacher and slowly turned it in his hand. Then a thought occurred to him. Perhaps this was all part of some prank the faculty was playing on him. That had to be it. The teachers he was meeting with today were some of Bedlam’s most faithful, the core of the faculty. Surely they weren’t all struggling with whether they should continue to teach.

Hearing a knock on the door, VanderHaar cheerfully called for the person to come in. Jane VanderAsh, Bedlam’s seasoned math teacher, came into the room with a gloomy look on her face. VanderHaar smiled, hoping that might cheer her. Jane had been a faithful teacher since before VanderHaar had taken the job of principal, and that was over thirty years ago. “Hello, Jane! Thank you for meeting with me.”

“I’m not coming back next year.” Jane said, matter-of-factly, setting an envelope on his desk.

VanderHaar drew in his breath. After a moment, he managed to form words. “Why not?”

She frowned. “I’m sorry, Mr. VanderHaar.” All these years, VanderHaar thought to himself, and she still doesn’t call any of her colleagues by their first names.

She continued, “I’ve been thinking about this for the past couple of years. Since we started focusing everything on standardized tests, I feel like I’m getting too old for this. My students do as well as they always have, but every time those test results come out, I panic. And when a student’s score dips, I blame myself. I know the school board sees those results, and that makes me feel worse. I know I’m still a good teacher, but I feel lately that I’m the kind of good teacher that nobody wants anymore. And I’ve stopped seeing my students as children of God. I’m starting to see them as test scores. That isn’t fair to them. They deserve better.”

She paused. VanderHaar drew in his breath to speak, but she held up a hand. “Don’t say a word. My mind is made up.”

She turned on her heel and left. VanderHaar smiled. If this was a prank, he was impressed. Jane VanderAsh had never been much of an actor. She must have really worked at this.

Another knock. This time it was shop teacher Gord Winkle. VanderHaar greeted him warmly.

Gord looked sad. “Won’t be back next year. After we had the twins, money has been pretty tight. Back in January, I was offered a job, and I asked for more time to think about it. I love teaching at Bedlam.” Gord’s breath caught and VanderHaar thought he might cry. Instead, he sniffed and went on, his voice cracking. “But this is a good offer, and I’m going to take it.”

VanderHaar nodded, unable to imagine the school without Gord. “What will you be doing?”

Gord’s face lit up. “It isn’t teaching, but it’s the next best thing. I’ll be working for a company that maintains and builds out additions to bakeries and restaurants.” Gord’s eyes got that twinkle that VanderHaar had seen only when a student he was teaching had just caught on to an important concept—or when there were both donuts and cake in the teacher’s lounge. “Anyway, sorry it took me so long to decide. Thanks for everything.” Gord Winkle walked out the door, his expression one of a man anticipating working every day surrounded by pastries and sub sandwiches.

VanderHaar shook his head. Losing two dependable veteran teachers back to back? It had to be a prank. Then Bible teacher Cal Vandermeer appeared in the doorway. He put an envelope on the desk next to the two others that were there. Cal looked tired. VanderHaar knew what was wrong.

“Listen, Cal. I wanted to talk to you about the board meeting two nights ago.”

“There’s nothing to talk about. I care about teaching Bible, Bentley. I really do. And I do it well. But if there’s no room for questions, no room for human uncertainty, no room for my students to doubt and struggle and ask questions . . . then I can’t do this.”

“Yes, it is. The board has set parameters around what I’m allowed to address in class, and I feel hemmed in. I’ve dedicated my life to helping teenagers see how God’s Word helps us navigate life. Kids have questions about human sexuality, about creation and human origins, about politics and justice, and the school is supposed to be a safe place to ask those questions. The board has made it clear that I’m to address none of that. What the board wants is a Sunday school class for five-year-olds, with me telling Bible stories with a flannelgraph. Well, if I can’t help my students see why those stories matter and what God might be saying to us through them, then I’m done here.”

“I have no idea. I’ll find something.” There was a pause. “I know you tried, Bentley. Thanks.”

And then Cal was gone. And so was any notion that this was a prank. Cal seemed so disappointed that VanderHaar felt like crying. VanderHaar felt like he had let Cal down. He should have had better words for the board. When he heard another knock on the door, he cringed.

Christina Lopez stuck her head around the door and asked, “You have a minute, Bentley?”

He nodded. Sliding her school bag off her shoulder, she sat down in the chair opposite him, smoothed her skirt, and took a deep breath before making eye contact. Then she plunged ahead.

“I think it’s time for me to move on,” she said. “You see, fifteen years ago, when I started, I loved teaching English, and I vowed that if the day ever came that I no longer felt that way, I would quit and find something else to do because the kids deserve better and I deserve better. Well, it pains me to say it, but I’ve reached that point: I don’t love my job anymore.”

VanderHaar wiped a hand across his face, sighed deeply, and then asked in a somber voice, “Why, Christina? What’s changed?”

Christina shook her head sadly and said, “I’m just so sick of fighting people about books. It didn’t used to be like this, but I’m going on four years in a row where I’ve been summoned to appear before the Education Committee because someone doesn’t approve of what we’re reading. Can’t teach Brave New World because it promotes sex and drugs. Can’t teach The Underground Railroad because it has three sentences that are too graphic sexually. Can’t teach To Kill a Mockingbird because it uses offensive, racially insensitive language. Can’t teach Macbeth or The Crucible or Harry Potter because they contain witchcraft.”

“But Christina,” VanderHaar interjected, “you won all those battles. You got permission to continue teaching all those books.”

Christina smiled sadly. “I don’t feel like I won. I feel like no one—not parents, not the school board, not the administration—trusts my judgment. Plus, now the board is demanding that we write trigger warnings for each book we teach, and I’m pretty certain that doing so will only increase the number of parents complaining. I’m tired, Bentley, and I’m done. Sorry.”

She reached into the bag at her feet and produced an envelope that joined the others on VanderHaar’s desk, and she left.

Unfortunately for VanderHaar, hers was not the last letter of resignation he received that day. [This is only part of the article. Want to read more? Subscribe to the website by choosing "Register" from the menu above. It's free!]

Twenty years ago, exactly, in the April 2000 issue of CEJ, a new column called Slouching toward Bedlam debuted. Jan Karsvlaam wrote in every issue about flawed and imperfect Christian schoolteachers who care deeply about their students and through whom God does amazing things, much like the teachers in your school. With this issue, Bedlam comes to a close, and Jan will miss the faculty of Bedlam Christian. Jan would like to thank Burt, Gary, Mark, and Steve and Abby—all the editors he has worked with. He is thinking of putting together a book of all the columns (or at least the funny ones), if it seems like there is interest in that sort of thing. He also wants you to know that he writes under a pseudonym, but he hopes the spring weather will clear up his allergies in due time.