Jan Kaarsvlam recently emailed the CEJ board to discover why he was not given the position of editor.  He has learned, much to his distress, that they were concerned that his proposed thirty-six-part-series on the educational philosophy of Hendrick dePflegm (the little-known leader of a small group of Flemish immigrants who hoped to found a Calvinist nation in the swamps of southern New Jersey and were never heard from again except for a twelve-page note found nailed to a tree outlining an argument for something called superinfra-lapidarianism and ending with the enigmatic words “We need to find some food, or barring that, rubber boots”) might eventually become a bit tedious.  Jan is currently between jobs.

“The last thing we need is a new mission statement!” shouted Bedlam’s science teacher S. Brian O’Brainargh as he stomped into the staff room.  Conversations about sports teams, health care, quilting and the best way to get chili stains off a garage door died a swift death as all eyes turned toward the excitable O’Brainargh.  He hit the edge of the table with a sheaf of papers he was holding and continued.

“I mean, correct me if I am wrong, but didn’t we just go through this rigmarole five years ago?  I don’t have time to sit through another series of endless meetings, arguing over whether the word therefore implies that the school isn’t giving low-achieving phys ed students equal focus with low-achieving metal shop students!  What’s wrong with our old mission statement?”

The room was silent, except for choir teacher Carrie Wellema, who sighed deeply, and shop teacher Gord Winkle, who was reading Fitness magazine while gnawing on a chicken drumstick that he had spread peanut butter on.

Biology teacher Sam Toomer cleared his throat to get everyone’s attention and said, “I know it’s hard work, but I think this whole mission statement thing is important.  We are living through the end times, beset by powers and dominions we cannot see, so we really need to be intentional about our mission if we want to be found faithful in our task come Judgment Day.”

Toomer’s eschatology, being based on a Southern Baptist understanding of scripture, tended to be a bit more dire than the rest of the staff’s, but O’Brainargh saved everyone else the embarrassing problem of trying to move the conversation forward.  “Exactly!” he shouted.  “Come Judgment Day, I want to be busy doing something important, and sitting for hours on end arguing silly semantics for a document that none of us can remember six months after its composition, well, that just doesn’t feel important to me.”

Phys ed teacher Rex Kane immediately voted for the latter, but Toomer insisted on the former.  Small arguments erupted around the room until O’Brainargh shouted, “Stop it!  My head’s going to explode.”

The room fell silent for a moment, and then Carrie Wellema spoke quietly.  “You know, I was chair of the committee the last time we did this, and I had to read a lot of mission statements from other Christian schools.  It seemed to me they all had some combination of competent and Christlke and excellence. I guess there is nothing wrong with that, but sometimes I wonder what would happen if we really went out on a limb and came up with a mission statement like, ‘Bedlam will teach students not to pass judgment on others, just like the Bible tells us.’”

O’Brainargh frowned and muttered, “Oh, yeah, like the board is going to go for that.”

Guidance counselor Maxwell Prentiss-Hall had slipped in the room moments ago, and he put in his two cents:  “That would be a distinctive school, though, if we did what Carrie said.  Or otherwise, maybe it could be something like ‘Bedlam aims to teach your child how to be nice to others and take care of the earth.’”

Sam Toomer smiled, “Or maybe ‘We’ll teach your child to work for the coming of the Lord.’”

Rex Kane jumped in, “No, no, I’ve got it.  ‘At Bedlam, we’ll treat your kid like they are a human being, even when they set fire to a vending machine.’”

Gord Winkle set down his chicken bone.  “I was thinking something like, ‘Bedlam Christian School will teach your child to enjoy God’s world in all its diversity.”

O’Brainargh muttered again, “By diversity, you mean both glazed doughnuts and apple fritters.”

Carrie cleared her throat.  “We are laughing at these suggestions, but I guess what I like about them, even the silliest ones, is that they say something.  The hardest thing about this writing a mission statement is that even if we come up with something real and authentic—something that makes an important statement, and might set our school apart from others—you know that by the time the committee drafts it and the school board and administration modifies it, it is going to be the same watered down combination of competent, excellent, and Christlike.  If we are serious about Christianity transforming the world, why can’t we come up with a mission statement that would at least make our school different than Dewey Public High down the street?”

Toomer sighed, “Or at least different from mainline Christian schools.”

O’Brainargh stood up from his chair.  “The problem with all of your suggestions is that they would be pointless.  You don’t think for a moment that having a mission statement would mean that the institution would actually work toward that vision, do you?  Mission statements oversimplify, hence leaving things out.  The only way to include everything we want included is to render the statements so broadly that they become meaningless.”

“What we really need,” he continued, “is frequent in-services and department meetings and faculty reading groups and other such things that keep our focus our task in all its glorious complexity.  But that would require more organization and thoughtfulness from our fearless leader.  Old VanderHaar is too lazy to plan those sorts of activities. Instead, we have to waste time and energy on a bogus exercise so that he can pretend he is helping to cast a vision here.”

An awkward silence hung in the air, for O’Brainargh had vocalized what many of the teachers felt but feared saying.  Principal Bentley VanderHaar had become more misguided or lazier or more confused over the past few years.  No one was sure which, but no one missed the damage he had slowly been doing to Bedlam.

Carrie leaned forward in her chair.  “The more I think of it, the more it seems to me that we don’t really need another mission statement. What we need is a shared vision of what Christian schooling here at Bedlam ought to be.  I sometimes wonder if VanderHaar thinks the job of finding a vision for our school belongs to him and him alone.  But even if he could come up with a clear mission statement on his own, it wouldn’t do any good.  It has to be something that we all share, that is inside our hearts.”

Toomer sighed again.  “But what if we all can’t agree on a vision together?  What if it ends up watered down again?”

Gord Winkle strode to the end of the table, still brandishing his chicken leg.  If this were one of those inspirational teacher movies, the music would have swelled at this point, and the camera would have caught the utterly sharp focus of determination in his eye.  Even without that, though, this was Gord Winkle’s finest hour.  He opened his mouth, for once free of food, and a voice of thunder emerged.

“It’s doesn’t matter, Sam, whether we ever agree or not.  We need to talk with each other and wrestle with concepts and work out our understanding of what God intends for our callings.  Brian is right.  We need the time to do that.  And I think it is bigger than this school.  It seems to me that Christian schools across North America, and maybe the church itself are having an identity crisis.  Are we supposed to be elite private schools, churching out young professionals who can get high-paying jobs?  Are we supposed to be safe havens where kids can be safe from people and ideas that might be different from them?  Are we supposed to be evangelism centers, converting the heathen hordes?

“Or are we supposed to be something else, something new and different, exciting and rejuvenating?  I don’t know, but I don’t think we are going to find out without a whole lot of discussion and thought.  We ought to be reading new perspectives and talking about crazy ideas and taking risky chances, instead of sitting around bemoaning declining enrollments.  In fact, as teachers, we ought to be helping the larger church through this, by teaching them how to brainstorm and listen and evaluate.  We need to start doing more than talking about vision.  We need to help our people to see!”

And, to be fair, if Gord Winkle had stopped his speech there—as the assembled faculty stood at rapt attention, with passion ignited in their hearts, and the sense of calling that some of them had not heard for years once again clear and meaningful—if he had stopped there, Gord’s stature in the eyes of the faculty would have been transformed.  In a matter of a few short years, he would have become the main speaker at the regional Christian Educator’s Association Conference, would have taken over the principalship of Bedlam from a retiring Bentley VanderHaar, and eventually would have become the director of Christian Schools International.  But, of course, Gord Winkle did not stop there.  With every ear in the room hanging on his every word, he added just one more sentence.

“And when we have those meetings, you know, to talk about vision and stuff, it would probably help us think if we had doughnuts, or maybe pizza.”

The enchantment evaporated, the faculty returned to the mundane world, and went back to thinking about their vision for their next lesson.  Gord Winkle sighed, and tossed his chicken bone in the trash. 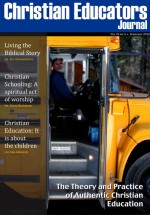