Years ago, when I first began teaching at a Christian university, I asked a student at the start of a class to help me distribute a pile of quizzes that I needed to return. She passed out several before pausing and then resorting to standing and calling out names to identify the remaining recipients. I was a little taken aback. It was a beginner-level language class with lots of speaking practice, and I had been calling on students by name multiple times each day. It was several weeks into the semester. Yet this student appeared not to know the names of many of the other class participants. Apparently, knowing who else was there was not considered necessary to successful participation. There was no doubt a larger culture at work here, but I had to acknowledge that it also said something about the culture created in the class that I was teaching. I did this.

The following semester, a student who had been in that class asked me to mentor him. We began to meet weekly to discuss a range of topics. One day I allowed myself a little rant. “I had not taught full-time at a Christian institution before coming here,” I told him, “so I did not know exactly what to expect. But I am getting the impression that the general ethos among students is that each is here to get their learning and their grade from the instructor, and whether the person sitting two seats away from them lives or dies is none of their business. Other people are the teacher’s job. And I am wondering how that can possibly be Christian. Am I my brother’s keeper? Love your neighbor as yourself? All of the ‘one another’ stuff? It seems wrong.” What stayed with me from that conversation was the student’s response. He was a deeply thoughtful person with an articulate and passionate commitment to his faith. He had been through Christian elementary, middle, and secondary school and had spent time at two prominent Christian universities. Yet the idea that part of his discipleship included taking some personal responsibility for the academic wellbeing of the people sitting around him in class was an exciting new vista. He was animated with possibilities. I thought: how could he get through that much Christian education and this still seem new? Of course, a deeply individualistic surrounding culture is in play, but it also helps if seating arrangements in his classrooms were rows of individual, forward-facing chairs; if assignments were always solo; if grading was always individual; if attending only to the teacher’s words was rewarded; if his considerable academic success never actually depended on anyone but the teacher. We did this.

What connections and responsibilities do we have to one another as we learn, and how do they become part of the planning, teaching, and learning process?

This was one of several experiences that started me thinking about the nature of the temporary community that is built during a course of instruction. What connections and responsibilities do we have to one another as we learn, and how do they become part of the planning, teaching, and learning process? Could I do something that would lead students closer to the “one anothers” while remaining focused on teaching my discipline?

Years later, I was in a conversation about planning for online courses early in the pandemic. It was that moment of parachute-deprived freefall into Zoom, and a group of faculty were brainstorming ways to make our first stab at large-scale online instruction somewhere close to palatable for all involved. Someone spoke up in favor of building a sense of community and suggested reserving a discussion forum where students could post personal pictures and share a little about themselves. This is by no means a bad idea, and I don’t think my colleague intended it as a comprehensive account of classroom community, but it made me pause. It made me wonder what we mean when we say “community.”

The history of Christian theology includes quite a lot of reflection on the nature of Christian community. In fact, it is a recurring theme in the major creeds and confessions. The Westminster Confession of Faith (chap. 26) puts it this way:

All saints that are united to Jesus Christ their head, by His Spirit and by faith, have fellowship with Him in His graces, sufferings, death, resurrection, and glory: and, being united to one another in love, they have communion in each other’s gifts and graces, and are obliged to the performance of such duties, public and private, as do conduce to their mutual good, both in the inward and outward man. Saints, by profession, are bound to maintain an holy fellowship and communion in the worship of God, and in performing such other spiritual services as tend to their mutual edification; as also in relieving each other in outward things, according to their several abilities and necessities.

Several points that have been emphasized in various classic theological writings are worth noting here. Community (“fellowship,” “communion”) is rooted in Christ, not in preference. Our commitment to one another does not arise because we share the same politics or musical tastes or ethnicity or neighborhood or nationality or sporting allegiances. It does not arise because we would have chosen one another. It arises from God’s choice to unite us in Christ. As Dietrich Bonhoeffer argued much later, if we confuse Christian community with the cozy feeling of being with people we like, we will quickly become disappointed with the actual people with whom we have been placed in fellowship by God’s choice. They will fall short of our dream of unfractured belonging, they will spoil our idyll, and we will become accusers of others (Bonhoeffer 35–38). When the Westminster Confession of Faith (chap. 26) speaks of fellowship, the focus is not on feelings, but on responsibilities and practices—we are “obliged” to the “performance of duties” that amount to whatever contributes to the good of others. This is not restricted to religious behavior. Yes, it includes “worship” and “spiritual services” (the things that modern Christian talk tends to have in mind when referring to “fellowship”). But it also includes “relieving each other in outward things,” whether those things are “public or private.” Community here means (i) an acceptance that we belong by receiving grace, and (ii) an obligation to work out that belonging in intentional, practical, real-world acts of service aimed at one another’s overall wellbeing. Community is about embodied actions and mutual support in all life contexts, not just good company and church meetings.

I don’t mean to gloss over the real differences between the nature of the church community and the nature of a school class, but I want to focus here on some connections. Love of neighbor applies to the classroom as much as to the sanctuary. Classrooms include public and private actions, and opportunities to build one another up both in our spirits and in terms of our practical needs—in our ability to thrive. What if classroom community is not primarily about whether we can generate a feeling of camaraderie and a warm glow at being together, or whether we get to share our pet pictures, even if those things can have their own role and importance? What if classroom community is about investing in practices that habituate us to seeking one another’s good rather than primarily our own individual success? This is an abridged version of this article. To read more, subscribe to the print or digital edition of Christian Educators Journal.

Smith, David I. On Christian Teaching: Practicing Faith in the Classroom. Eerdmans, 2018.

Westminster Divines. “The Westminster Confession of Faith.” Ligonier, 12 May 2021, https://www.ligonier.org/learn/articles/westminster-confession-faith. 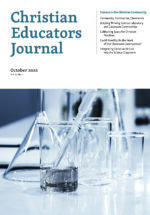