Gord Winkle sighed with happiness. It was second period, his free period. The only other person to share his free period was Carrie Wellema, the choir teacher—and since the choir room was so far away from the staff lounge, she seldom made the trek. That meant that Gord was all alone with the five big boxes of doughnuts from Vern’s Bakery. And although they were technically for Bedlam’s student council to sell during break, it was understood that the teachers were each allowed one doughnut gratis. Gord would be able to take the covers off all of the boxes, spread them out on the work tables, and take his time before choosing the one special doughnut that was calling him. And if, perchance, there were two doughnuts calling him, well, Carrie Wellema had practically told him he could have hers. Maybe he would have a long john instead of a cake doughnut. Or maybe a fritter. Maybe two fritters . . .

The far door to the staff room slammed open and Bedlam’s librarian, Jon Kleinhut, stomped in, his entire face red with fury. He threw a pile of papers down on the table and pointed his finger straight at Gord.

“This is the stupidest stupid thing I have ever heard!”

Gord, who was perhaps the most deeply nonconfrontational man on Bedlam’s staff, hated when Jon got angry. Gord could never tell if Jon was angry at him or at someone else. And worst of all, Jon’s finger was forcing him back, away from the doughnuts that were calling his name.

“First it was the faculty book club. OK, I like books. Then it was the mandatory two professional development events per month. That was a pain, but I could handle it. I watched the stupid webinars on whatever stupid new educational buzzword Vanderhaar was obsessed with at the time. None of them had anything to do with the library, but since I am technically a faculty member, I did it.” Jon drew in a long breath, gathering himself for the next assault. The whole time his finger remained leveled at Gord, which made Gord feel guilty, especially because he’d liked the book club and the webinars. Both had given him new ideas to try in the classroom, and Vanderhaar had arranged for some terrific snacks at those meetings. One time he’d even served O-Ke-Doke cheese popcorn.

“But this is the stupidest.” Jon read from the memo: “All faculty members must set at least three goals for professional development for the coming year. Each goal, in turn, requires at least three triangulated assessments so that the staff council can determine, during the faculty member’s annual review, the progress the faculty member has made toward his or her goals.” Jon paused for a breath. Gord, who stared wistfully at the pile of boxed doughnuts, slumped into his seat and sighed sadly, and for Jon, the sigh was confirmation that he’d found a colleague who felt similar distress. Jon began again.

“There is not a faculty member at Bedlam who doesn’t work at least twelve hours a day by the time you include extracurriculars and grading. Most of us voluntarily attend conferences and read publications related to our field. Why do we have to spend another ten hours a week jumping through this stupid hoop? Tell me, Winkle! Why?”

Jon had finally dropped his hand to his side. In fact, he had moved to the coffee pot on the counter, leaving an opening for the doughnut boxes. Gord subtly threw his weight forward on his chair, but nothing happened. Confused, he looked down to see that someone had locked the casters on the bottom of his chair. He quickly flipped them up with his toes, but by that time Jon had once again stepped between him and his coveted prize. Glumly, Gord leaned his elbows on his knees and rested his chin on his balled hands.

At the sight, Jon’s tone softened. “Is there something wrong, Gord?”

Gord stared longingly past Jon’s hip where the corner of one doughnut box coyly peaked out from behind, teasing him. He steeled himself, pulled his gaze up to Jon’s concerned face, and answered in his most professional voice, “Jon, I could not disagree with you more.”

Jon stared at him, dumbfounded.

Gord continued, “We need professional development, Jon. The world is changing and doing so at an alarming rate. If we’re going to keep abreast of things, we’re going to need to keep educating ourselves.”

“No sheep-dip, Sherlock,” Jon said as he rolled his eyes. “Are you listening to a word I’m saying here?”

At that moment Jon shuffled slightly to the side, revealing two boxes of gleaming cinnamon rolls that arrested Gord’s attention. He licked his lips.

Jon continued, “I know we need to keep learning new things, but if we’re going to learn new things effectively, we need time to do it. Vanderhaar just keeps taking more and more of our time. He adds new responsibilities without ever taking away old ones. If I am always chasing my tail in circles, how am I to learn anything?”

There was a moment of silence, and then Jon added, “Well, what do you think?”

Gord looked up apologetically. “I’m sorry, Jon, could you repeat that?”

Jon shook his head at Gord and turned to gather up the doughnut boxes. He was student council sponsor, and he had to get these to the cafeteria before break started. All six boxes stacked, he turned back to Gord.

Jon started to leave the room. He paused at the door to add, “No matter how good doughnuts are, no one should be forced to eat that many.”

Left alone, Gord slumped into his seat and said aloud to an empty room, “Can you ever have too many doughnuts?”

Jan Karsvlaam has recently started his own educational consulting business: Education Capabilities and Mastery Unified (which he abbreviates to Educamafied). The professional development day he developed in conjunction with Tree of Life Christian School featured a whipped cream relay, two two-story-high bouncy slides, a petting zoo, and catering by Chipotle. A testimonial by the school’s principal read, in part, “I was stunned. Although I never did figure out . . . what . . . made it . . . so amazingly . . . not . . . horrible, I will say that nobody . . . complained. Never again . . . will I . . . hesitate . . . to hire him.” To have such an experience in your school, contact Jan through his website, Educamafied.com. 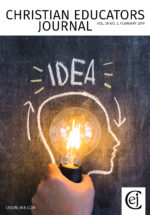