Marduk was the chief deity of the Babylonian pantheon. Every aspect of ancient Near Eastern society was arranged around the temples of the gods: humankind existed, so it was thought, to care for the gods. Genesis 1 and 2 is written in the shadow of ancient Near Eastern temple mythology. It dismantles the dominant worldview of its time and builds an understanding of the world that gives hope. Not enslaved to the gods, God’s people are launched into society to love the world with God as their strength.

We similarly live in the shadow of the Western worldview. We affirm Christ as Lord, yet the Western cultural edifice casts a shadow over our lives that is nearly impossible to escape! The consumerism, individualism, and narcissism of our culture shade our reality, a reality built by Facebook, iPhones, and television sets.

The shadow of the Western worldview stretches to our classrooms also. The Western worldview is our default. Yet Christian teachers I know are aware of this danger and intentionally nurture students to step out of the cultural shadow to bring the light of the gospel to bear on God’s world. I write this article in appreciation of such teachers. It is my hope that Genesis 1 and 2 is fresh inspiration as you pursue the task of Christian education.

We will take practical tips for education from three motifs of Genesis 1 and 2: the garden, four rivers, and humankind bearing the image of God. These motifs are a part of the semantic library of the ancient Near East. They speak the language of the ancient world in order to turn the ancient world upside down! Let’s see how Genesis 1 and 2 maintain constant dialogue with the ancient Near Eastern worldview.
[This is only part of the article. Want to read more? Subscribe to the website by choosing "Register" from the menu above. It's free!] 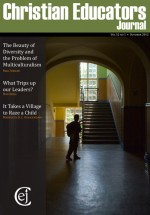