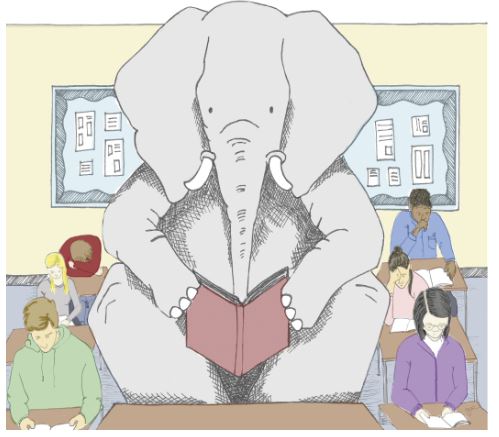 Teaching argumentation in the high school English classroom in fall 2016 proved more challenging than any other leading up to it thanks to one man: Donald Trump.

Many of my students loved him: they wore Trump shirts, MAGA hats, and spoke excitedly about attending his rallies and having the chance to vote for him. These students were often outspoken and were not too eager to hear from any dissenters. Any comment I made as devil’s advocate, hoping to engage in thoughtful discussion, instead earned me a label as a “liberal with an agenda” (what else could a critic be?).

While this clear political divide had been developing in our country for quite some time, Donald Trump was the one who brought it into my classroom. My students either loved or hated him and his supporters. He was all anyone could talk about, and his style of argumentation combined with his vitriolic rhetoric—as well as his opponent’s responses to these characteristics—presented many opportunities for teaching how we as Christians ought to argue.

However, our school’s administration made it pretty clear that we were not to discuss politics in class. We were not to share with students our own political leanings—let alone our candidate of choice—nor were we to engage them in discussions related to controversial stances the candidates had taken.

Basically, we were told to ignore the elephant in the classroom.

Our school was not alone in its approach. Conversations with many other Christian schoolteachers have affirmed my suspicion that this practice was commonplace. And I understand the reasoning behind it: engaging in these arguments can be incredibly divisive and can detract from what should be happening in the classroom.

However, whether or not we choose to address the elephant in the classroom—whatever it may be—it’s still there. Students know when we’re ignoring it. We deflect their questions with feeble excuses, and we stick to the script, so to speak.

Until we can’t, or won’t, anymore.

As much as I tried to avoid discussions about the presidential election, it was all that some of my students wanted to talk about. In all honesty, I wanted to talk about it too, not to try to influence them to vote as I would but to look at what it might mean for them to live “in the world but not of it” in the way they evaluate candidates and engage with those across the political aisle.

So I began talking with my students about the elephant in the classroom.

To set the stage for how we should discuss controversial people and topics, I showed my classes a Heineken ad titled “Worlds Apart” (easily found on YouTube). It’s a four-and-a-half-minute ad that begins with clips of individuals sharing their political beliefs: one identifies himself as being on the “new right” politically; the next is a “feminist 100 percent”; one is a climate-change denier; the next believes “we’re not doing enough about climate change”; one wants trans people to have a voice; the other doesn’t understand trans people.

And then, this question appears on the screen: “Is there more that unites us than divides us?”

A provocative question! One that is put to the test in this video when, unbeknownst to them, these political opposites, who know nothing of the other, are paired together and tasked with completing a project. After completing the first step in the process, the pairs are given questions to prompt discussion. They discuss adjectives that describe themselves and identify things they have in common. While the discussions begin simply enough, after only a few minutes, several of them open up quite a bit. One participant, in response to what she has in common with her partner, comments, “We know each other better than people who’ve known each other for 10 minutes should.” Dramatic irony being what it is, though, everyone watching knows that the pairs will learn the truth about one another eventually.

I won’t spoil the end of the video. It’s that good. Suffice it to say that my students got it. When I asked how two diametrically opposed individuals could be so civil with one another, even after learning of the political elephant that lay between them, they answered that the individuals first built a relationship with a person they saw as another human being, not, first and foremost, as a political opponent. When they did this, the elephant was still between them; it just wasn’t so imposing anymore. When they learned it was there, they realized that it was secondary to the person on the other side of it.

Ultimately, this video shows us that ignoring the elephants isn’t the answer. Elephants are too big to ignore.

As the elephants in our classroom come and go, we must remember that we serve a God who is bigger than any presidential candidate, political party, or controversial proposal on a ballot. He gave us His son to model for us how we ought to treat those with whom we disagree. The approach we should take is one of love, not ignorance.

We should talk about the elephants in the classroom, but only after we acknowledge the child of God sitting on the other side.

I want to thank Julie Thrower, art teacher at Unity Christian High School (Hudsonville, MI), for her amazing cover! It illustrates so well the imposing nature of controversial topics in the classroom and how difficult they are to ignore.

I also want to thank the other individuals who have helped me assemble each issue of the CEJ during my time as editor over the last three years. Melisa Blok, our copy editor, made sure that every article in every issue was free of confusing sentences and grammatical errors. Heather Altena, our web shepherd, has made significant updates to our website, including improved access to the CEJ archive. Bill Vriesema, our business manager, has ensured that printed issues get to your mailboxes and that our finances are in order. And I would certainly be remiss if I did not thank Jen Brink, our design editor—and my wife. She gave the CEJ a design overhaul when she came on board and helped bring my vision for each issue to life in ways I never would have thought to. It has been a joy to work with her.

As I step down as editor of the CEJ, I am excited to announce that two capable co-editors will be stepping into the role. Steve Tuit and Abby Zwart have collaborated for a while as fellow English teachers at Grand Rapids Christian High School (Grand Rapids, MI) and are now looking forward to teaming up for the benefit of all Christian educators who read the CEJ.

Klaas Wolterstorff will also be stepping in as the CEJ’s new design editor. Klaas has many years of experience in the publishing world, and I look forward to seeing how he will bring his own vision to the cover and pages in future issues.

Mark Brink formerly taught high school English and served as managing editor of the CEJ for the last three years.