Maxwell Prentiss-Hall, Bedlam’s counselor, entered the teachers’ lounge at break and slumped quietly into a seat. Resting his chin in his hand, he sighed deeply and then grimaced as he slapped his fist on the table. Bible teacher Cal Vandermeer looked at him with surprise, but it was gym teacher Rex Kane, working the crossword puzzle at the other end of the table who first responded. “Something wrong there, Maxie boy?”

“Yes, there is,” he snapped back.  “There is something very wrong. I just talked with Mason Callahan, for the last hour. And you know what he told me?”

Rex still didn’t look up from the crossword. In fact, he seemed not to have even heard. Cal cleared his throat and asked, “Um, what did he tell you?”

“Ha!” Rex said, a smile spreading on his face as he quickly filled in a word on the puzzle. Cal shook his head at the P.E. teacher and turned back toward Max with a shrug.

Max continued, “He told me that he is an atheist because being at Bedlam Christian has convinced him that Christians are dumb people who are afraid to face hard questions or uncomfortable truths.”

“Those are pretty serious charges,” Cal said. “And did he tell you why he feels that way?”

“Yeah, I guess it all started in biology class a month or so ago. Sam was teaching a unit on biodiversity, and at some point Mason asked whether the evolution of species was thought to increase or decrease biodiversity over time.”

“Hmmm, that’s a pretty good question,” Cal said. “Of course, I had Mason in Bible class last year, and he’s a thinker, so that doesn’t surprise me. But I’m not seeing the atheism connection.”

“Apparently, he no sooner asked the question than a bunch of kids in class started saying evolution was a lie, that only atheists believe in evolution.”

Cal turned red as he began to imagine the scene. And for all the places for this unfortunate scene to happen, Sam Toomer’s biology class was probably one of the worst. Sam was a nice enough guy, but he had a reputation for being a coward when it came to addressing anything even remotely controversial in class. With fear that he already had a pretty good idea of what the answer would be, Cal asked, “And what did Sam do?”  [This is only part of the article. Want to read more? Subscribe to the website by choosing "Register" from the menu above. It's free!] 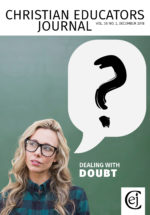