Restorative practice is gaining momentum in schools and other settings around the world. The increasing development of restorative practice as a field of study and serious practice is an interesting phenomenon considering the traditional reliance on punitive measure in dealing with wrongdoing and misbehavior. Why would schools be interested in this approach? What is it about restorative practices that not only intrigues school administrators, teachers, and other school staff, but has them seriously considering how this approach can build stronger and safer school communities? How can a Christian school incorporate restorative practice as a meaningful expression of what it means to be a school grounded in Christian values? What is needed for this to occur? How does one journey to this place?

Based on observations of schools that have been successful in making and maintaining this kind of change, they have moved beyond seeing restorative practice as discrete, individual practices simply to address issues of harm or misbehavior. Instead, school staff, students, and parents embrace restorative practice as a way of thinking and being. It becomes both a philosophy and an approach that informs all aspects of school life. At the International Institute for Restorative Practices Canada (IIRP Canada), we have come to understand that the best way to move effectively in this direction is through the restorative practice framework.

The restorative practice framework provides a construct for acting restoratively in a community as a way of thinking and being. With application in various settings such as schools, facilities, community programs, workplaces, faith communities, and families, the aim of the framework is to focus on strengthening relationships and repairing harm as a way of building community. In schools, it is meant as an integrated, proactive approach where a major goal is the effective reintegration of students when addressing situations where harm has been done. The framework has direct application for teaching, learning, and creating and maintaining safe, inclusive schools.

Although the restorative practice framework is applicable in many settings, one of the key areas where IIRP Canada works is with schools, helping them apply this framework to build and sustain stronger, more effective school communities. Through a day-long in-service for all school staff, assemblies for students, and parent workshops connecting restorative practice to parenting, we introduce all stakeholders in a school community to different ways the framework can be applied in their setting. In addition to this, we offer other kinds of skill-based trainings that support restorative approaches in schools, such as facilitating restorative conferences and the effective use of circles in the classroom.

A core theme in scripture is Jesus’s emphasis on relationships. This begins with God’s act of restoring humanity to a healed relationship with God through Christ’s life, death, and resurrection. The ways in which this is applied to day-to-day relationships was a key focus of Jesus’s ministry and teachings. We see it in parables such as “The Lost Son.” We see it in Jesus’s teachings about love (the Great Commandment and the admonition to love one another). We see it in the manner in which Jesus interacted with his followers and the way he welcomed women, children, outcasts, criminals, and people needing physical, spiritual, and emotional healing. He challenged those who were judgmental to recognize the humanity of those who suffer, as well as the need for forgiveness, the importance of letting go, and the call to live in healthy relationships as the core of who we are as human beings. Jesus was demonstrating a key emphasis on promoting healing and the strengthening of relationships.

Restorative practice is grounded in an understanding that relationships are at core of what it means to be human. We cannot exist outside of relationship. The healthier the relationships, the stronger we are, both individually and as a community. This applies whether we are talking about families, churches, schools, or the wider community.

We are called to a ministry of reconciliation. As Christian people, this is our call in all areas of our lives, starting with reconciliation to God through Christ’s death on the cross (2 Cor. 5:18). Throughout scripture, the emphasis on the central role of forgiveness and reconciliation in our faith is akin to the core values and purpose of restorative practice. When hurtful behavior occurs, the restorative mantra of talking about what has happened, looking at who has been affected or harmed and how, and what is needed to make things right, is similar in the Christian context to acknowledging our sin, confession, honest contemplation and reflection on the impact of our actions, reconciliation, and healing. Christians actively involved in restorative practice are engaged in a ministry of reconciliation. It also is a practical, effective way of addressing issues of conflict, broken relationships, and wrongdoing in schools and congregations grounded in a theology of grace, in contrast to the adversarial-based techniques frequently utilized in these situations.

I want to end the article with some concepts taken from the restorative practice framework that can be useful in your work in Christian schools. The first is the idea of the social discipline window or practice domains, considered a cornerstone of restorative practice. Usually when things go wrong in schools, we think there are only two options to deal with the situation: a punitive response or a permissive one. This window shows a third option, a restorative response, usually is the most effective one. 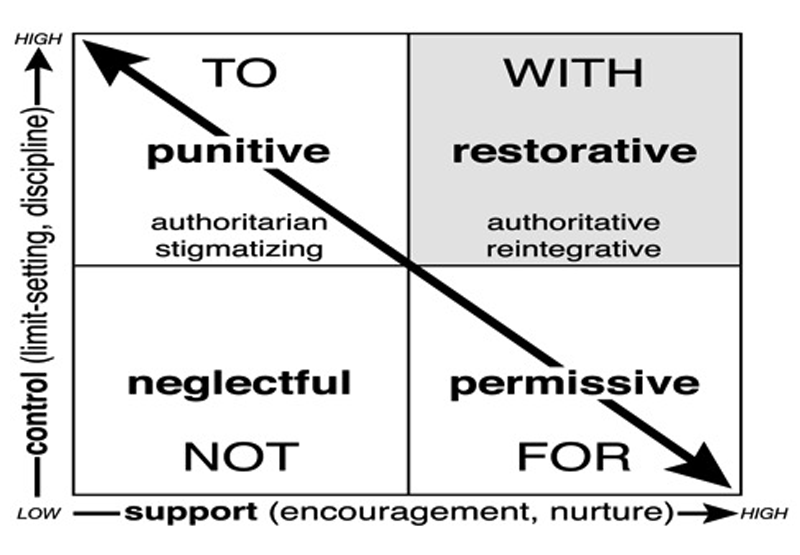 If someone in authority like a teacher or parent is mostly operating in the upper left quadrant, where their main concern is being in control (only thinking about how rules have been broken), they are being punitive and authoritarian. Their actions are to do things “to” others, which mostly stigmatizes. If someone in authority does not care about rules and expectations nor do they show any support or nurture, they are being neglectful and “not” really doing anything, as in the lower left quadrant. If the main response of someone in authority is to give support and encouragement, ignoring how limits or rules have been broken or harm done, we would say they are permissive. They really are doing things “for” others, as in the lower right quadrant.

If a parent or teacher or other person in authority is high on both axes, equally concerned about expectations, rules, and boundaries, along with being fair and supportive, they are acting restoratively. The authority operating in the upper right quadrant is authoritative in their exercise of authority, with an eye to reintegration and moving on. They work ”with” others in facing what has happened, who has been affected, and how and what is needed to make things right. In other words, their lens focuses on how the situation can be dealt with in a restorative fashion while still holding people accountable. We consider someone operating in the restorative quadrant as being “firm and fair.” When we work “with” others rather than do things “to” or “for” them, there will be a far better outcome on a consistent basis. A key question to consider is this: in which practice domain do you operate most of the time?

The other illustration is the restorative practice continuum. Before looking at this, let us consider the “restorative questions.” When someone does something wrong or has caused harm, instead of asking “why” and deciding on a punitive response, we believe it is more effective to use these questions in processing what has happened and deciding on the best way to address the situation:

In summary, restorative practice is really a way of thinking and being, far more than a group of practices considered restorative. It has wonderful potential for enhancing and strengthening Christian schools, since it is so closely akin with what we believe and affirm as Christian people! I encourage you to consider the many ways in which restorative practice can be a positive influence in your school community.