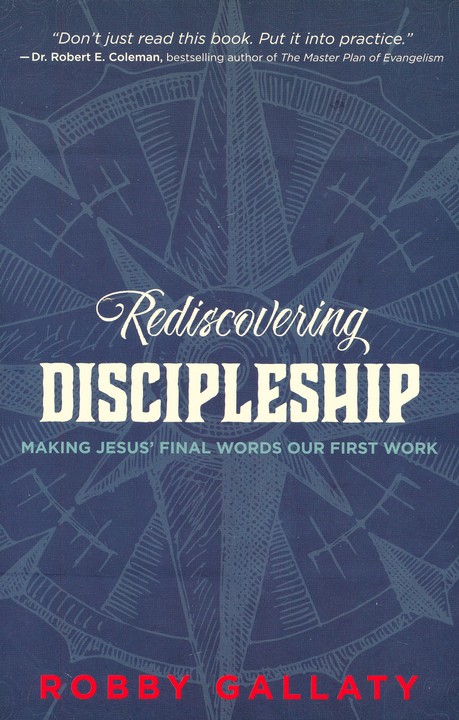 “Discipleship” is a word that is used often in churches but not as often used as it ought to be. Robby Gallaty’s book, Rediscovering Discipleship walks through the biblical idea of discipleship, the historical examples of it, the types of discipleship, and the elements that ought to be included in the process. Gallaty believes that many churches do not focus on discipleship because their leaders do not understand it or were never truly discipled themselves. He says that it is impossible to be led somewhere you have never been or to teach something you have never learned.

Gallaty’s book is written in two parts. Part 1 is titled “Know the Man Before You Go on the Mission,” and part 2 is titled “The Method of Making Disciples.” In the first half of the book, Gallaty teaches what discipleship looked like in the context of the Jewish culture when Jesus was on earth, how the early church fathers incorporated discipleship into their ministry, and why there is a discipleship deficit today.

Gallaty teaches what discipleship looked like in the context of the Jewish culture when Jesus was on earth, how the early church fathers incorporated discipleship into their ministry, and why there is a discipleship deficit today.

Jews were placed in school at a young age and began to learn from the rabbis about the Torah and the Jewish Bible. As they got older, the lessons became more rigorous. By the age of fifteen, boys were either chosen by rabbis for more training or went to work. Understanding this helps us understand who Jesus’s disciples were. They were young men, more than likely all under eighteen except for Peter who was married (75). Jesus taught them wherever they went and taught them in four phases: he showed them, then he allowed them to help, then they did the work with Jesus’s help, and finally he sent them out to minister themselves (36).

Gallaty then explains how some of the church fathers demonstrated discipleship. Augustine created a community of apprentices around him who he taught and studied with so they could also learn to make disciples (89–91). Whenever Augustine traveled, he always brought a student with him to watch and learn. Another pastor who Gallaty writes about is Jonathan Edwards. Edwards knew that “you can’t expect from others what you don’t emulate yourself” (99).

Finally, Gallaty points out that the church has not discipled in the way they should because there has been a misunderstanding about whose job discipleship is. Since the King James Bible was written, the mindset of discipleship was that disciple-making was the role of the pastor and those trained in the Bible (120–21). However, we must come to the understanding that the Great Commission makes disciple-making a role that all Christians must fulfill. We are all to disciple and evangelize.

In part 2, Gallaty talks about the difficulties churches face when trying to make disciples and steps they can take to better equip themselves when making disciples. [This is only part of the article. Want to read more? Subscribe to the website by choosing "Register" from the menu above. It's free!]

Nathaniel Miller is the Pastor of Music & Children at Emmanuel Baptist Church in Parrish, Florida. He is an alum of Southeastern University and Southeastern Baptist Theological Seminary. He and his wife, Heidi, have one son, Jedidiah.