Bible teacher Cal VanderMeer was sipping coffee and perusing the newspaper when his colleague, English teacher Christina Lopez, dropped into the seat next to him with a sigh so heavy that it actually ruffled the newspaper in his hand. He glanced up to see an expression he would have described as forlorn, perplexed, and angry all at once.

Before she could reply, gym teacher Rex Kane, who had just grabbed a gallon jug of some unnaturally blue beverage from the fridge, said, “Yeah, you look like your dog died or something.”

He took a swig straight out of the gallon container, wiped at his mouth with the back of his hand, and then stopped movement all together and stared at her. He added in a soft voice, “Hey, man, do you have a dog?”

When Christina shook her head, he burst into a smile. “Whew!” he said, dropping into the seat across the table from the other two, “I was afraid I’d really put my foot in it.” He leaned forward conspiratorially and whispered, “Believe it or not, I’ve been known to do that.”

Cal folded his newspaper with great deliberation and swiveled in his seat so that he could see only Christina. He asked again, “Is something wrong?”

“There sure is,” she answered. “I was summoned to appear before the education committee of the school board last night to defend my teaching Brave New World. Some parents are accusing me of giving students pornography.”

“Aah,” Cal said. “One of the most banned books of the twentieth century.”

Now Rex leaned forward, intrigued. He cradled his jug, resting his chin on the top while he stared at Christina. He asked, “So this book, I’ve never read it. Is it . . . um, is it titillating? Kind of sexy?”

Christina tilted her head to the side and stared at him like he was a moron. “No, Rex, it is not.”

He looked disappointed. “Why are they upset then?”

Cal’s first impulse was to remind Christina that the members of the school board were good people, by and large, and that maybe she should talk to them and try to reach an understanding. But Cal had been around long enough to know that sometimes it was better to let people vent.

Rex, however, had no such restraint. “You’re telling me! Just last week they turned down my request for new warm-up jackets for the wrestling team on the grounds that we just bought warm-up jackets for the basketball team. Now I ask you, what kind of a moron can’t tell the difference between basketball and wrestling. I mean, come on. The guys playing basketball would be the ones who have a basketball. Should the wrestling team have to suffer with outdated styles just because some moron on the school board can’t tell the difference between two sports that have as much in common as a 1952 Mustang convertible and a bloated and dying cow?”

Silence fell, as it often did after Rex spoke. Then Christina cleared her throat. “Okay, maybe they aren’t morons, but the point is, none of them have even read the book.”

“Then how do they know if it’s pornographic?” said Rex, who seemed genuinely dumbfounded.

“And the thing is, that’s not even the point,” said Christina. “If I am going to teach these kids critical thinking and the ability to discern in a complicated world, I need to work with some material that has something in it worth discerning. I tried to explain to them that it isn’t just a question of what’s in the book. It’s more a matter of what we do with it in the classroom.”

Cal nodded. “You know, that’s interesting. I have been teaching here for thirty years and every year I teach from a book that contains blasphemy, perversion, extreme violence, explicit descriptions of sex, drunkenness, betrayal, incest, idol worship, and more, and no one has ever so much as raised an eyebrow.”

“Wow! What’s the name of the book?” asked Rex. He had his phone out and was clearly ready to take notes.

Rex laughed. “Oh, I get it. You’re just messing with me.”

“No, Rex,” said Christina. “All that stuff really is in the Bible—but after listening to sermons all their lives, the board is intuitively aware that those moments in the Bible need to be understood in the context of the larger narrative. Cal, that is a good example, but even that doesn’t quite fit the bill. Brave New World is a work of satire, and like all good satires, it uses hyperbole to get us to see our own follies and sinfulness. In this case, Huxley is showing how we live for pleasures and let our hungers for those pleasures define us and our morality. He uses the funhouse mirror of satire to show us how grotesque our behavior actually is. But people don’t like what they see in the mirror, so they want to break the mirror rather than admit what they look like and seek to change.”

“So this book has sex and mirrors in it?” Rex asked, licking his lips. “Sounds like the No-tell Motel down the street. No wonder you got in trouble, Christine.”

“It’s a metaphor, Rex.” Cal spat out the words without even glancing at the P.E. teacher. He leaned toward Christine and asked, “Did you explain it to the school board like that?”

“I tried,” she said, “but I don’t know if anyone really heard me. A few people were nodding their heads, but I don’t trust that they won’t change their minds the next time some parent complains. Meanwhile, our kids continue to live in a sex- and drug-saturated culture that bombards them with temptations to make poor choices, and we do nothing to open their eyes. And the school board,” here Christina laughed bitterly, “well, they’re busy people. And despite a two-month warning, not a single one of them, not one, read the book. It all just makes me feel like the idea of meaningful Christian education is dead.”

And with that the bell rang to end break.

Rex figured he had a little time while his students changed for gym class. He decided he would stop by the library and see if they had a copy of Brave New World. He figured he had better read it to see what all the fuss was about.

And Cal, who had been feeling pretty good previously that morning, could not help but hear in the ring of the school bell the clarion sound of Childe Roland’s horn, summoning an end to more than simply the morning break.

Jan Karsvlaam has recently started in his new job directing the drama program for second and third graders at Grace and Peace Christian School in Sept-Îles, Quebec. Jan has planned an exciting and challenging seclude for this academic year including Shakespeare’s Hamlet, Luigi Pirandello’s Six Characters in Search of an Author, and a six-hour musical puppet abridgment of Anna Karenina, which he wrote himself. Although his principal is skeptical, Jan is sure his young charges will rise to the occasion. 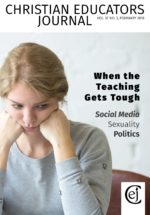