Jan Kaarsvlam has just been appointed head chapel sponsor at Western Michigan Christian in Muskegon, Michigan. The three bands that he would most like to see play in chapel at his school are “Bruce Boxleitner and the Reasonable Substitutions,” “ Spoiled Meat,” and “Vomitorium.”

It was time for chapel at Bedlam Christian School, and math teacher Jane VanderAsch was in her assigned area, making sure that her pre-calc students were behaving themselves. As she waited for the chapel to start, though, she saw several unsupervised classes where students slouched in their seats; a few, beating the rush, were already sound asleep.

Jane wasn’t necessarily a chapel booster (she often wished she could skip the students’ clumsy attempts to articulate their faith), but that wasn’t the point. The absent teachers were not living up to their responsibilities.  Jane herself was not the sort to leave her charges unattended, but the anger welling inside her finally moved her to rashness. As she stood and moved up the aisle, she heard one of the chirpy members of Bedlam’s chapel team introducing Jimmy Ray and the Little Church Dogies. A shudder ran up Jane’s spine as she headed for the staff room.

When she flung open the door, she saw Christina Lopez, one of Bedlam’s English teachers, John Cloudmaker, a Bible teacher, and head custodian Ed McGonigal, who was regaling the other two with a joke. Jane caught only the last few words.

“. . . use both hands, lad,” Ed said, slamming his coffee mug to the table. “Ye’ll get more in.” Christina and John roared with laughter, wiping tears away as Ed’s whiskered cheeks blushed modestly.

“Aren’t you supposed to be supervising chapel?” Jane asked, perhaps a bit more shrilly than she intended.

Christina smiled. “Yes, we are—well, John and I are, anyway.”

Jane stood momentarily, her mouth opening and closing like a fish out of water. “Then why aren’t you?”

“Well, this is the fifth country music praise team to play in chapel this semester. Nashville has apparently become the seat of the high priest and our only channel to God.” It was Christina’s turn to be a bit more strident than she intended.

Cloudmaker and McGonigal, quite content to remain spectators, like the crowd at Wimbledon, snapped their faces back toward Jane.
[This is only part of the article. Want to read more? Subscribe to the website by choosing "Register" from the menu above. It's free!] 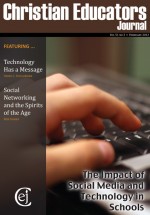