The word “discipline” has suffered negative connotations over the last several years, especially in educational circles. When they hear the word, many immediately think of punishment, yet nothing could be farther from the truth. Webster’s Dictionary defines discipline as both a noun and a verb. As a noun, it is “training to act in accordance with rules; drill.” As a verb, it is “to train by instruction and exercise; drill.” Either definition suffices, as discipline is not punishment; instead, it is training and order. I recently polled those adults I interact with daily about discipline. I asked them to play a word association game with me. I would say a word, and they would say the first word that came to mind. When I said the word “discipline,” of the twenty people I polled, fifteen responded with words associated with punishment; the other five gave the following answers: “trouble,” “time out,” and “pushups.” Discipline is none of these things, especially in the field of education.

Sylvester Kohut, Jr. and Dale G. Range argued this same point twenty-five years ago. “Discipline is teaching and learning; it is not punishment” (Kohut and Range 11). Their argument is two-dimensional, involving imposed discipline by a system, and self-discipline. Schools are supposed to impose discipline through a system for the specific purpose of instilling self-discipline in individuals. While this was a lofty goal when originally proposed, today’s discipline is often rooted in punishment and therefore has no hope of instilling self-discipline in our students. True discipline is defined by training in accordance with standards, but today’s parents, even those in Christ, have fallen victim to the view that discipline is harmful. We parents tend to try to rescue our children from anything difficult, but while we are doing this in the name of love, we are not instilling in our children the ability to operate in the world as it is. There are rules and standards. Not everyone will win, and, those of us in Christ will lose more than we win in this world. We will need to persevere and work hard, and therefore, we must be wary of discipline that presents a world contrary to the one that awaits us.

Russell J. Skiba and Reece L. Peterson suggest current discipline policies are lacking. They write, “The past ten years have seen a dramatic increase in the promulgation of zero tolerance school discipline policies. Relying primarily upon school security measures, zero tolerance policies tends to punish both major and minor incidents severely in order to send a message that certain behaviors will not be tolerated” (Skiba and Peterson 337). Zero tolerance policies, in my opinion, are not discipline policies; because they are rooted in punishment, they do not reform present behavior, modify future behavior, or instill a Christian view of the world in students. Instead, these policies focus only on past behavior, which they punish harshly. Too often, students subjected to these policies are punished with the expressed purpose of being examples to the rest of the student body. While this may indeed discourage others from engaging in the behavior, it does nothing for the student who committed it, and I believe it does even less for the hearts of the rest of the students. Those students who are punished are sacrificed for what is perceived as the greater good—an obedient student body. But will the rest of the student body now possess obedient hearts, or have they only learned what will now be considered disobedient?

What is currently taking place in schools regarding discipline? Richard L. Curwin and Allen N. Mendler write, “In most schools and classrooms, so much of what we call ‘discipline’ gives children the message that they will be punished for not doing what they are told” (Curwin and Mendler 11). The authors write about the message sent to students through a system that does not use discipline correctly. Systems that communicate “follow the rules, and you will be rewarded, and if you do not, you will be punished” tend to produce defiant students. These students are usually issued time outs, detentions, and calls home. None of these methods have proven to be effective, as any school administrator will attest. These methods tend to produce the exact behavior they are trying to modify. There is no grace and no ability to recognize student motives. Discipline systems molded in these ways are called obedience-model techniques. These systems are built for the students who obey. Discipline systems need to be structured for the students that will become engaged in them, not for those who will rarely encounter them.

Whether we reference the Christian school or the public school, the issue is the same. I believe our discipline issues tend to lie less with the student and more with the system. The systems condition responses in our students that lead to behaviors, and if those behaviors are contrary to our desires, should we not look at the system first, before we blame the student? When discipline is viewed as punishment, it will be used as punishment. Discipline administered in a systematic format communicates to students certain information regarding the school’s relationship with them. First, our rules are absolute and any violation of them will result in severe consequences. Second, as long as you follow our rules we will get along just fine. And, finally, our rules are more important than you—the student—are.

Curwin and Mendler recommend responsibility-based models. They write, “Responsibility models, on the other hand, require teaching students the skills of decision making and providing opportunities to see appropriate behaviors in action from good role models” (Curwin and Mendler 12). Unlike the obedience-model techniques, which work to create fear that something bad will happen when rules are broken, responsibility models actually change student behavior. The authors write, “We find that more students actually change their behavior when they are given instruction on how to behave in the future, rather than simply admonished for behaviors in the past” (Curwin and Mendler 12). Discipline aimed at future modification is training and structure and not punishment. Punishment is always about past behavior and never about reforming future behavior. Obedient students have few behaviors that need reforming. They know how to obey and conform, which is why they are obedient. It is the other students, those who do not yet grasp these concepts, who need reform. They need a system that provides them with the skills to produce the behavior that will lead them to future success.

Discipline, whether it is rooted in responsibility or obedience, requires one foundational ingredient missing in most discipline systems of today—a relationship. As I have highlighted in this article, discipline is not punishment. It also is not systematic; it should not be aimed only at past behavior and should be created with those students who need it foremost in mind. For discipline to be truly effective, for it to be life-changing and rooted in Christ, it must be based on a relationship between a student and an adult. Teachers must know their students by more than their names; they must know them as disciples. Teachers must understand that they are role models in the classroom but also outside the classroom—in the halls, on the athletic fields, in the stands, and in the band and choir rooms. Discipline that changes a student’s life is discipline administered in a loving and fair way by a teacher who knows their students in ways that go deeper than mere names.

For those of us in Christian schools, discipline without a relationship will not communicate the grace of the gospel or the love of Christ and will be, as Proverbs so accurately states, “vanity and a striving after wind (Eccles. 1:14, esv).” Discipline built the wrong way will never matter as much as it could if it is built the right way—as part of a discipleship relationship between a teacher and a student. Discipline administered in a consistent way stops being discipline and starts becoming discipleship. Teaching is discipleship; they go hand in hand. And isn’t discipleship a foundational element of the Christian life, an element to which we are all called? Discipline is not punishment and should never be confused as such. It is order, training, relational, and life-changing if it is understood as discipleship.

One thought on “Discipline to Discipleship: A New Path for School Discipline” 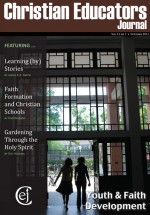