You have already read of the importance of the Cardus Education Survey for Christian school administrators, staff, and supporters. Elsewhere in this journal you can find summaries of the qualitative studies incorporated in the Phase I research. Here we will walk through a few of the most important findings of the quantitative research done by the University of Notre Dame on the largest-ever representative sample of Christian school graduates.

We certainly lack the space here to report any more than a fraction of the findings, so this article—in fact this entire issue of Christian Educators Journal—is best rendered side-by-side with the report itself, available free online at www.carduseducationsurvey.com. Also online are two study guides to help apply the findings to your own school communities. The summary below is much abbreviated; the report nuances each of the claims below in greater detail, and shows the methodology used to make those claims.

Allow us to urge you to absorb, in equal measure, both the favorable and unfavorable results of this study. It would be easy to proof text from this study, and give a few lines of ammunition to your school’s enrollment or development directors. Yes, by all means, celebrate the good news, and come to work tomorrow with more confidence in what your school is doing well. But do not skip the troubling findings—for it is here, in the benchmarks established today, that this survey might best be able to help your school in the long run.
Foundational and Reliable

* The “zero” or baseline in all graphs is public school graduates from comparable backgrounds (controlled for financial, social, and religious factors). The figure and table numbering corresponds to numbering in the original Cardus Education Survey report.

Compared to their peers in public school, Catholic school, and nonreligious private schools, Protestant Christian school (PCS) graduates are uniquely compliant, generous, outwardly focused individuals who stabilize their communities by their uncommon commitment to their families, their churches, and the larger society (fig. 3). 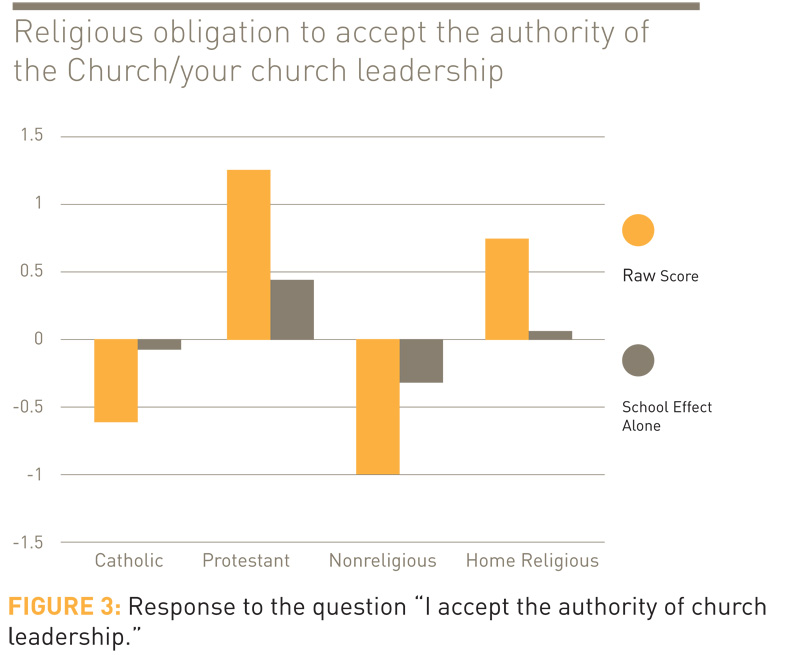 Those strengths are reflected in notably lower rates of divorce, for example, and in markedly higher attachment to family, to church (fig. 2), and to faith life itself among PCS graduates against the levels of their Catholic, nondenominational private, and public school peers. 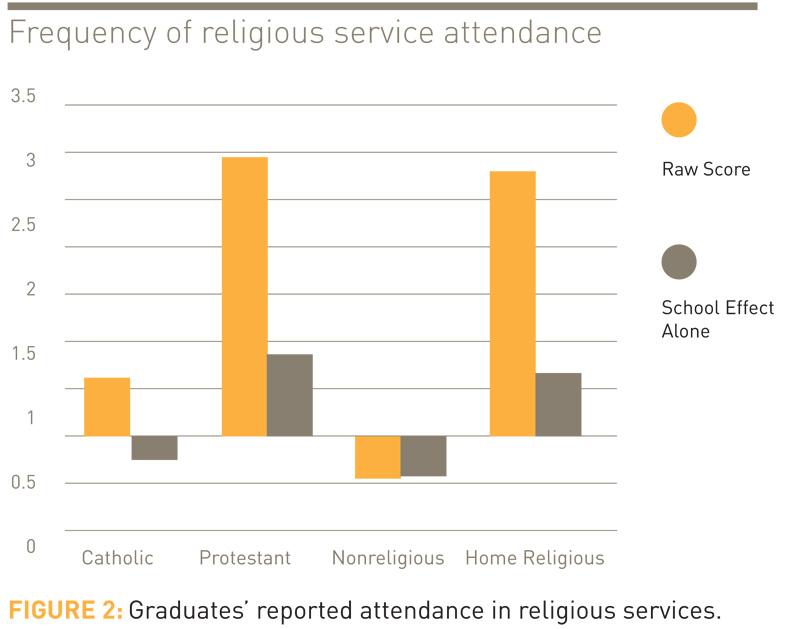 PCS graduates also donate money significantly more than graduates of other schools (fig. 7), despite having lower household income. Similarly, they are more generous with their time, participating far more than their peers in service trips for relief and development as well as mission trips for evangelization. 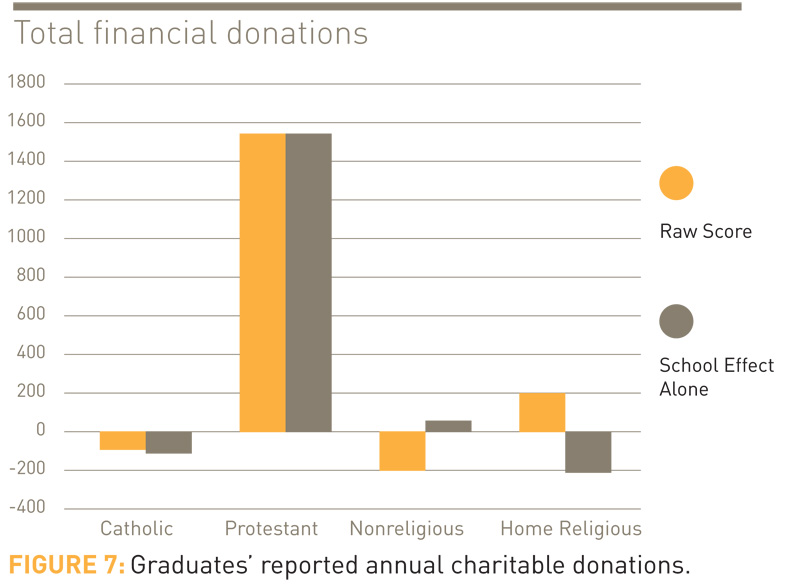 One of the most significant findings of the Cardus Education Study is that attending a Protestant Christian school seems to affect the choice of graduates to stay within the faith through their adult lives. Not only do they score higher than their Catholic, public, or nondenominational private school counterparts in such areas as church attendance and contribution to their church (volunteer and financial), they rely on God and scripture significantly more often to make moral decisions in their personal lives (fig. 15). 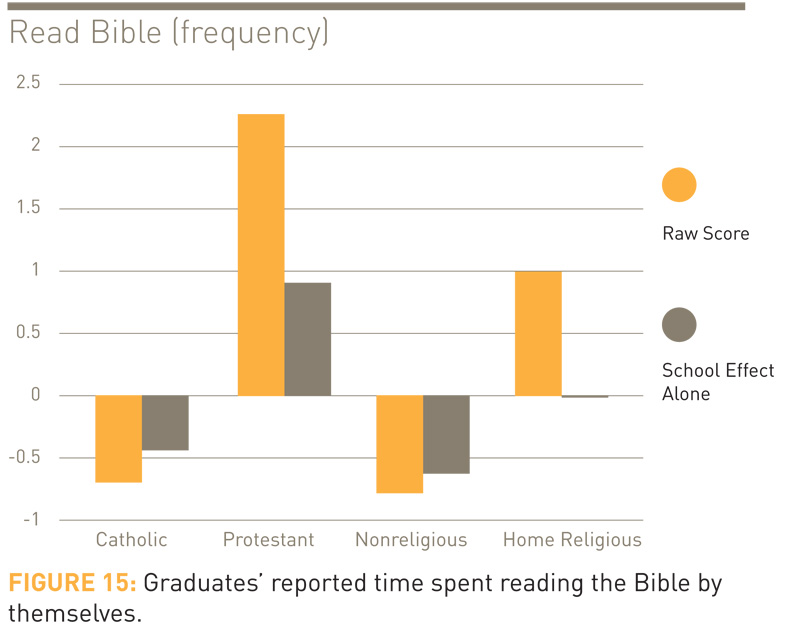 PCS graduates are not at odds with the society around them, or pessimistically detached from it. It turns out they are not what those south of the border term “culture warriors.” In fact, the statistical data shows unequivocally that PCS graduates:

From the perspective of faith commitment and contribution to our shared public lives, Protestant Christian schools are turning out foundational, reliable, and indispensable members of society.

It is in the findings on academic development and cultural engagement that the Cardus Education Survey should most challenge supporters and staff of Protestant Christian schools.

Our research indicates that Catholic schools are providing high quality intellectual development for their students, but at the expense of developing faith and commitment to religious practices in their graduates. Conversely, Protestant Christian schools are seemingly providing a place where students become distinct in their faith, but are not developing academically at any better rate than their public school peers.

Protestant Christian schools are not seeing their graduates enroll in as many elite colleges and universities, gain as many advanced degrees, or earn incomes as high as their peers in Catholic and other schools. Protestant school administrators put less emphasis on university degrees, and their academic programs include less rigorous course offerings across the board.

Attending a Protestant Christian school appears to affect the post-secondary choices of graduates negatively. It noticeably decreases the graduate’s likelihood of obtaining an advanced degree. And along the way, there is less availability of advanced placement courses, including in senior-level physics and calculus—indicators of academic rigor and emphasis.

PCS graduates also do not engage vigorously in political life, or even in political discussion. Statistically, they are actually much more likely to actively avoid politics and show a consistent distaste for going against established constructs of society. They respect authority, and avoid behaviors that might be perceived as challenging the status quo.

What Should My School Do Differently?

The most important discovery of the Cardus Education Survey is that graduate results are a faithful realization of intentions. What administrators and educators want is what they get in the graduates they send out into the world. Mission matters.

Protestant Christian schools greatly emphasize family priorities, family values, and family coherence (fig. 24)—and they get it in their graduates. Yet if one purpose of Christian education is highly developed faith, surely those involved must also hope that it will develop highly educated Christians. Without attention paid to the academic program, a Christian school is nothing more than a tuition-based youth group. Christian schools need to hold themselves to the same standards they use to challenge their students; pursuing excellence not only has utilitarian benefits, but is also a spiritual virtue and a necessary stewardship of the gifts and opportunities that God provides us.

On cultural engagement, some may be relieved that more recent graduates of Christian schools are not following the clichéd political paths of an earlier generation that was negatively characterized as the “moral majority” or the “religious right.” But it goes both ways: there are now serious questions about the outright exclusion of the opinions and values of this segment of the population from contemporary political dialogue and cultural influence. The marginalization of the Christian voices can be seen more and more on both sides of the border. The very freedom to conduct private Christian education, especially in some parts of Canada, sees increasing challenge.

If the unquestioning, nonconfrontational way of life is distinctive of Protestant Christian school graduates, how can these schools possibly achieve their stated goal of developing the next generation of leaders who will influence culture?

The question takes on added seriousness when linked to the comparatively weaker educational attainments of graduates from Protestant Christian schools. There has always been, and always will be, tension in Christian education between the emphasis on developing lifelong faith and focusing on immediate academic achievement. We would never assert that attending highly selective colleges is the ultimate goal of K–12 education. However, when almost 90 percent of Catholic schools report placing students in top twenty universities compared to 50 percent placement for Protestant Christian schools, the gap itself surely requires attention.

Is your school maximizing its potential, serving well the communities in which you operate? In closing, consider these adapted discussion questions, taken from a much longer list in the survey report:

Consider your school’s mission, and examine the graduates you are sending out. (Cardus can, at cost and supported by donors, study your own graduates specifically, compare them to the national data sets, and provide a custom report. Details online at: www.cardus.ca/research/education/compare/.)

This study is a start, and sets a benchmark for future study. There are valid questions as to geographical variances in the data on either side of the border. At Cardus, we are continuing this study with a view to provoking a conversation that will help us all reflect and improve.

But action does not require further study. The Cardus Education Survey confirms the important contribution that Christian education is providing today, and highlights even greater opportunity for tomorrow. Carrying out this noble vocation and looking for ways to do it even better is a means to serve God, church, family, and country. Christian educators: keep on.