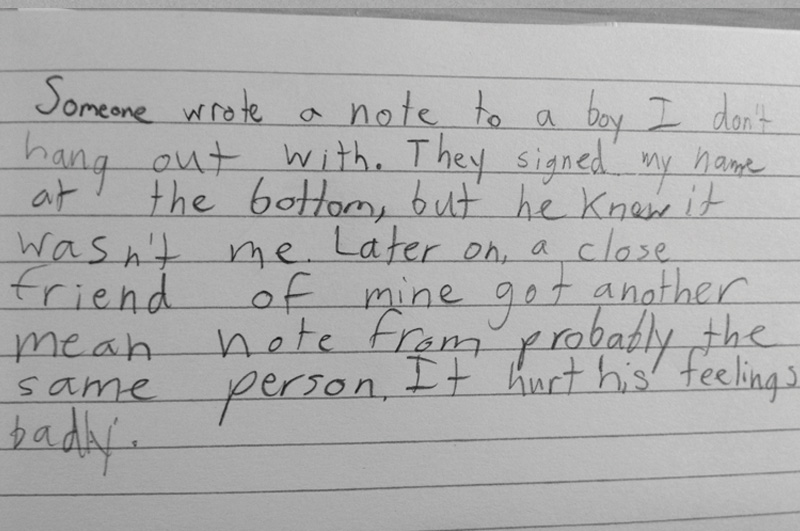 Dr. Bill Boerman-Cornell and two of his students at Trinity Christian College, Matt Mulder and Kaitlyn Manning, asked other Trinity students for stories of bullying. The following paragraphs are some of the responses they got.

“I remember when I was in middle school, I was a new kid (coming into a Christian school from a public school). I got picked on by older kids quite a bit (once they took my Bible out of my backpack and tore it in half). I remember, though, the day I found out there was another kid who had it worse than me. He spent every break time hiding behind one of the main doors to the school. When that door was open to let the students in and out, there was a triangular space created behind it. That’s where he hid, every break. I often wonder what the teachers were doing during break.”

“I experienced a lot of bullying in early middle school. For some reason, one of the guys in my class was convinced that I was gay, and wouldn’t let me go a day without reminding me of it. I don’t really know what set it off, but it made my sixth grade a living hell. I dealt with it the wrong way by just suppressing my anger for a while until eventually I shoved him very hard into a locker.”

“Third grade recess nearly always ushered in a wave of isolation. I did not fit in. The other girls saw me as a squirrelly white girl with obscure tastes and the boys wanted nothing to do with my cootie-infested awkwardness. I was the new girl, and no one likes the new girl. Because my parents were involved in the town, I knew one of the eighth-grade boys, so I tried talking to him often. His ‘girlfriend’ did not like that. Before school one day, she lifted me up against the red brick wall by my belt and told me that third-graders had no business speaking to eighth-graders. In the moment, I could not identify what fault I possessed that caused the other kids to pick on me. All I knew was that no one else in the class enjoyed reading as much as I did and that I fell almost immediately when I attempted double-dutch. The other children threatened and chased me around the playground. They never physically hurt me, but they instilled a deep fear in me that caused me to sit close to the teacher with a book in my hand as often as possible. That didn’t help, of course, because then I became the teacher’s pet. I never told the teacher and she never seemed to notice. I honestly felt as if the teachers did not like me either. I felt neglected and vulnerable. After two years of misery, little ten-year-old me convinced my parents to let me change schools again.

“I feared the cycle would continue by transferring, but the risk was worth it if it meant getting out of that school. However, this time I had a plan. I portrayed myself as tough, which of course I wasn’t, and kept my public book reading to a minimum. The kids as this school were much nicer. I learned that it was okay that I read, because they did it too, and not a single girl in my small class owned a jump rope. I gained friends quickly. Unfortunately, that went to my head. I realized that I got a new start in transferring, and I took full advantage of it. I noticed that picking on the girl with the baggy clothes and short hair formed a bond with some of the other girls. I didn’t even realize that within a year, I went from the victim to the bully. I did not think I was bullying. In my mind, she made me uncomfortable and I did not want to be around her. Years later, we became friends, and only then did I understand the damage I had inflicted in middle school.”

“I don’t think I’ve ever been a bully intentionally. That being said, I’m almost positive that I’ve been a bully to somebody or another. I’m a very pessimistic and cynical person a lot of the time, and that sometimes leads to me being quite mean to people around me. This usually makes me feel in control for a while, but overall it is quite bad.”

“A guy in my church was bullied badly when he was in high school. It was a Christian school and because he had a best friend, other guys in the class accused him of being gay. He knew he wasn’t gay, and he knew the smart thing to do would be to end the friendship, but he wasn’t willing to let them ruin that for him. The other guys really got nasty then. Finally he attempted suicide. It almost seems like they didn’t leave him any choice.”

“What can schools do about bullying? I think they can do exactly what my middle school didn’t really do: get rid of it at the source. My school never really addressed the issue, even though I brought it up, as did my mother. This lack of administrative intervention is what led me to shove that kid into a locker (and subsequently, my mother to tell off the administration when they called her and told her that I shoved a kid into a locker. I believe her exact words were something along the lines of ‘So now will you take care of this bullying thing?’).”

“I never had my head shoved in a toilet. I never was picked up and carried outside the school and thrown into a dumpster. Nobody ever threatened to fight me in the park after school. I have never been defamed on Facebook. I was never jammed into a locker. No one ever keyed my car or stole my phone or set me up on a fake date so they could ridicule me. Nope. The only thing that ever happened to me was that when I was in high school, older kids passing by would shove me into the wall and laugh and never look back. That’s it. But it felt like I was small and insignificant and hated. I know it hurt me deeply, and I can still feel that hurt. And if I can feel that, I can only imagine how the kids who did have their head shoved in a toilet, or had their car keyed, or were mocked, shunned, hurt, or abandoned must feel. Maybe as a teacher I could make a difference for some of those kids.”