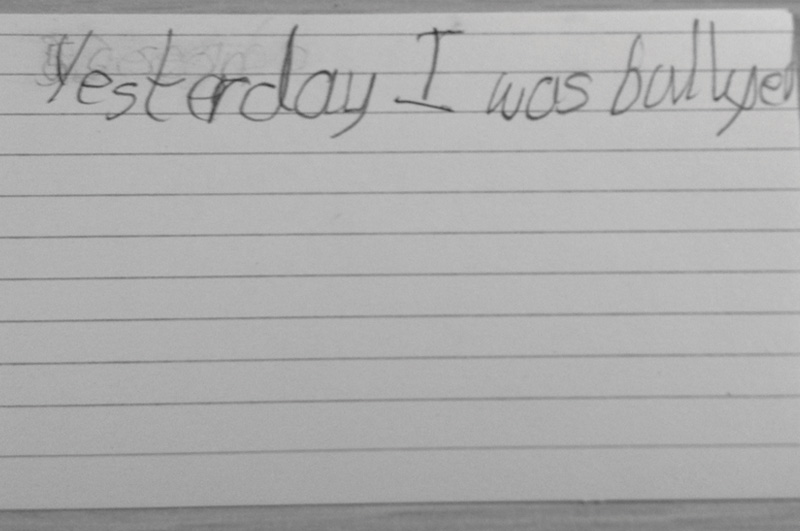 There is a child in your class with her head down on the table. She rarely makes eye contact, but rather glances to the side to check who is in her periphery. Smiles are fleeting. Another girl has been “fired” by her friends and she doesn’t know why. These former friends share private information with other classmates. Rumors start flying. A boy stands on the fringes of the playground. He scuffs his foot in the dirt and pretends to see something interesting. He has to be aware of where the other children are; he doesn’t want to get blindsided. Another boy opens his backpack when he gets home from school and finds a nasty note; on average he gets one once a week. Yet another child is hungry today because someone has stolen his lunch—again. A young woman has had it after weeks of abuse; she reacts and yells back at her tormentors. She curses. She gets in trouble for being disruptive. Her tormentors laugh when the teacher doesn’t notice. Another girl listens as her friends regale each other with stories of the fabulous party they went to this past weekend, a party to which she was not invited.

Children are bullied for any number of reasons: because they’re new to the school, because of their ethnicity, their taste in music, the brand of clothes or shoes they wear, a physical or mental handicap, for being smart or average, nonathletic or even too nice. Overweight, tall, or short children are mocked about their size and physical appearance. As classroom teachers, we can identify the popular, the wise, the athletic, and the socially awkward. And with training, we can identify learning disabilities and cognitive dysfunction. Surprisingly it is much harder for us to identify bullying instances.

A recent study conducted by The National Center for Learning Disabilities (NCLD) asked teachers to assess how often they were able to identify and deal with bullying in the classroom. The survey revealed that teachers believed that they were successful in spotting bully behavior about 71 percent of the time, while the research revealed it was much closer to 25 percent of the time. The study concluded that teachers were aware of and took action only one in twenty-five instances of bullying (Horowitz). It is not that these teachers were uncaring or unwilling to address the problem; I believe some of these instances happen too quickly to catch easily. The NCLD study concluded that thirty-seven seconds is the average time an episode of bullying lasts. A quick jab or a poke, a verbal taunt, or aggressive gesture can appear and disappear in seconds.

Whether we are able to witness these thirty-seven seconds of relational aggression or not, we need to be aware of some basic facts and statistics about bullying in schools. The 2012 NCLD survey was conducted in coordination with the documentary Bully. Researchers found that:

Published FBI crime stats from 2010 indicate that 10.9 percent of all reported national hate crimes (a total of 3,135 single-bias incidents) occur in schools and colleges (FBI Hate Crime Statistics 2010). Though the percentage of reported hate crimes decreased to 8.3 percent of all 5,790 single-bias incidents in 2012, the number of incidents on our national campuses rose to a total of 463, an increase of more than 120 (FBI Hate Crime Statistics 2012). As we know from the horror of school shootings and other random acts of violence, bullying behavior factors into these numbers.